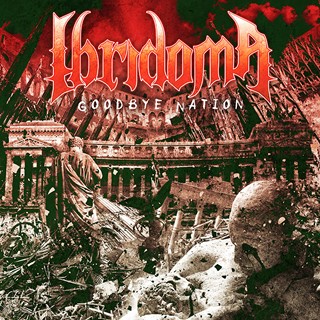 Review:
With two EPs and three full-length albums already under their belt, Italian metal band Ibridoma have been around for quite some time but have only recently come onto my radar. This just speaks to how many bands are out there these days producing hard rock and heavy metal music, and how hard it can be to get noticed. Upon listening to a snippet of Goodbye Nation I agreed to do a review, but after playing the entire album I realized that I just wasn’t into any of the songs. After warning guitarist Marco Vitali that a negative review would be forthcoming if Sleaze Roxx proceeded, he advised me to go ahead as Ibridoma were open to any opinions.

Ibridoma are a heavier power-metal band with a dual guitar sound and heavy drums that is closer to thrash than melodic hard rock. Although I enjoy the heavier music, there are two things that I simply can’t get into that unfortunately overshadow the songs on Goodbye Nation in a negative way.

The first thing is lead vocalist Christian Bartolacci‘s voice. He really has a love it or hate it type of voice and unfortunately, I hate it! I am having a hard time finding the words to describe his sound but I simply find his voice annoying, and during parts of some songs it feels that he is talking more than singing. On three of the nine songs on Goodbye Nation Ibridoma recruited guest vocalists including Rhapsody Of Fire‘s Fabio Lione, who sings on “Land Of Illusion”, and Primal Fear‘s Ralf Scheepers, who performs “My Dying Queen”. The more I listen to the album the more I get ‘used’ to Bartolacci‘s voice, but if anything, those guest vocalists give a glimpse of what Ibridoma could sound like and are capable of. The second thing I dislike is that although the music as a whole is enjoyable, I find the guitar solos on several tracks — such as “City Of Madness” and “Goodbye Nation” — do not fit the songs. The solos are usually slower and more melodic than the rest of the music — I would have expected faster and more furious solos to keep with those tunes’ heavy and breakneck theme.

It is not all pedal to the metal on Goodbye Nation, as the band even offers a ballad called “Arcobaleno” — which is presumably sang in Italian. With my very limited Italian language skills, it is tough to get into that one. My favorite tracks on the album are the ones that are a bit slower, without heading into ballad territory, such as “Dreams Of The Dream” and “Goodbye Nation” — since I find Bartolacci‘s voice more tolerable and enjoyable on those slower tracks. Moreover, the slower melodic solos that Vitali and his guitar partner Sebastiano Ciccale deliver, on such songs as “Dreams Of The Dream” and “Arcobaleno”, fit better on an overall level than on the faster tracks.

On an end note, Goodbye Nation is not a record that I will be revisiting anytime soon.