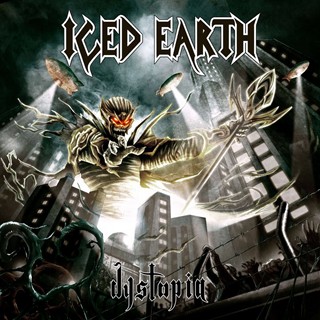 Review:
A lot has been happening on the Iced Earth front since 2004 — for starters, Jon Schaffer brought former Judas Priest frontman Tim ‘Ripper’ Owens onboard to fill the void left by singer Matt Barlow when he departed for a career in law enforcement. Iced Earth then released their most critically acclaimed album, 2004’s epic The Glorious Burden. The Owens/Schaffer team would then go on to release another studio album, 2007’s Framing Armageddon, which was a continuation of the storyline first heard on 1998’s Something Wicked This Way Comes. However the partnership went sour as the band resumed recording of the follow-up, 2008’s The Crucible Of Man — exit Owens and enter Matt Barlow once again. In between singer changes Iced Earth had a complete overhaul of their line-up, something that has been typical of the band with the only mainstay being founder and main songwriter Jon Schaffer.

In 2011 Schaffer announced that, once again, Barlow would be leaving the band and found himself on the hunt for a new vocalist. Schaffer discovered a replacement in Canadian Stu Block, who sang for the modern power metal act Into Eternity — a band that released two albums but failed to break. Iced Earth fans were skeptical of another vocalist change… if this didn’t work it would clearly mean the end of the band. Jon Schaffer and Stu Block had their work cut out for them, and in the summer of 2011 they issued a free download of the re-recorded classic “Dante’s Inferno” as a teaser to the critics and fans alike. Block handled the classic with respect, and added his own style to this spectacular rendition.

Jon Schaffer then returned to Century Media after a bitter split from the label about a decade ago, resulting in the new album Dystopia which features 10 tracks (the deluxe edition contains three additional songs) that are true to the Iced Earth legacy and sound. One thing that you can’t help but notice is the newfound energy and vigor that Iced Earth showcases on these tracks — from the opener “Dystopia” to the closing “Tragedy And Triumph” the duo of Schaffer and Block deliver a collective backhand to the nay-sayers. The highlights on Dystopia are the title track, a boundless melodic track with abundant riffing; “Anthem”, an epic song with a memorable chorus and a classic Iced Earth vibe to it; “Anguish Of Youth”, a ballad that could very well be the band’s most accessible track to date; and the hard hitting “V”, a track inspired by the film V for Vendetta.

Dystopia is one of the band’s strongest efforts of the past decade. The rhythm section of drummer Brent Smedley and bassist Freddie Vidales is a skintight unit while guitarist Troy Seele compliments Schaffer‘s whimsical riffs with his scorching leads. The songwriting on this album is superb, and is brought to life by Block‘s vocals which have an equal balance of Tim ‘Ripper’ Owens‘ soaring style and the power metal muscle of Matt Barlow with a touch of contemporary metal gruff.

Dystopia will get you excited about Iced Earth‘s return as Block‘s arrival has injected new life into the band. Jon Schaffer harmonizes brilliantly throughout the album while Block adds a new dimension the music. As a whole Dystopia is a return to form for Iced Earth — and a strong contender for metal album of the year.