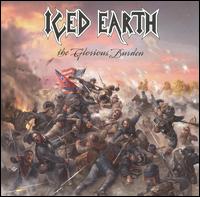 Review:
This is an album Iron Maiden should have made in the late 1980s or early 90s, instead, solid rockers from central Florida released it in 2004. In what can only be described as a labor of love of the band’s driving force, Jon Schaffer, this CD blends heavy doses of history with a thoughtful mix of emotions brought on by the tragedy of September 11, 2001.

The CD starts with an electric version of the “Star Spangled Banner” and segues into “Declaration Day”, a look back at the birth of the United States and the sacrifice it took to create this country. The very next track, “When The Eagle Cries”, is a touching nod to 9/11. The rest of the CD leading up to the three parts of “Gettysburg” touches on various historical and military subjects such as the Special Forces in Greenface, the ruthless Hun leader “Attila”, dog-fighting in WWI with the “Red Baron/Blue Max”, and the disgust of the Colonial soldier at “Valley Forge” if he could see what this country has become since the days he and his brothers sacrificed their lives for our freedom.

However, all of that pales in comparison to the three-part epic “Gettysburg”. The three tracks total 31 minutes and 53 seconds and cover the three days of battle that saw over 50,000 men laid to rest. Here Tim Owens and Jon Schaffer share vocal duties to help bring to life the two sides of the conflict, the Blue and the Grey. A 55-piece orchestra was also incorporated to help suck the listener into the story and it does an incredible job. This is as moving a piece as I have ever heard put to music, let alone with a metal background. Though it may be a part of America’s history, it’s pertinent to everyone who calls this planet home. As John Schaffer notes inside the CD jacket, “History, in my mind, is the most important subject that we as human beings can learn from. For those who find it boring I suggest that you find a new teacher, or study it on your own, for it is anything but boring. It is a necessity in our world, for those who are ignorant to it, are doomed to repeat
it.”

If the new Iron Maiden release left you wanting, thinking there could have been more, this CD will cover all their misses and then some. It would be a shame for the world at large not to hear this offering by Iced Earth.