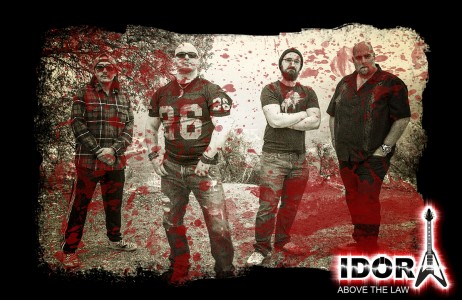 IDORA
ABOVE THE LAW
Released on July 7, 2015 (Idora Records)

Review:
When I first heard the beginning of the first track “Smoking Gun” on Idora‘s debut EP Above The Law, I was pretty sure that I would be hearing some retro ’80s hair band music but there was a quick — and actually a welcome — shift into classic rock territory from which the EP never strays until the last track.

Idora are based in Los Angeles but apparently have deep ties to the Youngstown, Ohio area. This likely explains the band’s name since there was an amusement park called Idora Park in Youngstown, Ohio, which was in operation from 1899 until 1984 when a fire in April 1984 devastated and damaged much of the park and forced its closure a few months later. Assuming that I am correct, let’s move on from this history lesson to Idora‘s debut EP Above The Law, which took me by surprise on how much I have enjoyed it to date.

As previously mentioned, the opening track “Smoking Gun” is a bit deceptive in that it starts off with a couple of screams followed by a scorching guitar solo before launching into really what I consider to be classic rock with some further remnants of ’80s type rock throughout the song with the guitar solos. In fact, the first four tracks on Above The Law would fit nicely and could easily be played on your favorite classic rock radio station. The fifth track “SSDD” on the other hand is very different and feels like a song emanating from some sunny spot in the Carribean. Of note, the lead vocals on “SSDD” are handled by guitarist — and I will assume band founder / leader — Mike Floros so the track already has a different feel to it based on that. “SSDD” is definitely the weak link on Above The Law and could have easily been left off the EP. Personally, I don’t mind the song but it does not hold a candle to the other four tracks on Above The Law.

The best tracks on the EP are the three in the middle: “Stand,” “Cry Me A River” and “Above The Law” — which is when the band concentrates on what is does best which is play solid and lighter “retro” classic rock. Both “Stand” and “Cry Me A River” are actually two of the slowest paced tracks on Above The Law but end up being the two standout tracks due to their feel and pleasant melodies. I always notice each of those songs when they are playing. The track “Above The Law” is interesting in that lead vocalist Brian Colkitt sounds an awful lot like Ace Frehley on that one. In fact, if someone told me that the Space Ace was handling the vocals on that song, I wouldn’t question it in any way. I have always liked Frehley‘s quirky vocals so no need to say that I enjoy Idora‘s song “Above The Law.”

Idora‘s debut EP Above The Law is a good and solid debut. I look at the album as a three part album: you have the opening track which has some ’80s hair metal traces, you have the three pure classic rock tracks in the middle and you have that Carribean like feeling song to end the EP. I understand that Idora will be releasing a full-length album in 2016 and I hope that the band will focus on the style of music that they are really good at which is classic rock.