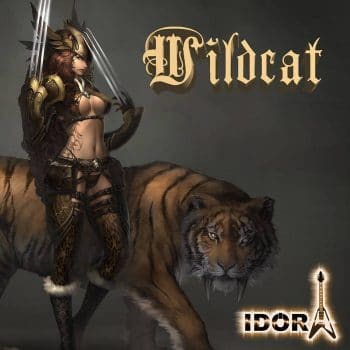 Review:
Idora might be billed as a “band” but for the group’s second album Wildcat, it feels more like a solo album from Mr. “Do everything” Mike Floros with some guest vocals from Brian Colkitt. I say that because on Idora‘s debut EP Above The Law, Colkitt sang four of the five songs with Floros handling lead vocals on only one of the tracks. This time, for reasons that I do not comprehend, Colkitt has been relegated to only singing lead vocals on half the tracks with Floros tackling the other half. Now, this might not be a big deal to you or even Colkitt for that matter but it is somewhat of a big deal for me since I much preferred Colkitt‘s singing over Floros‘ vocals on Idora‘s debut EP.

As it turns out, Idora intentionally did not indicate which song each singer sang on Wildcat so although I could sort of make out who sang what song, I ended up following up with Floros to get the lay of the land in that regard. In a nutshell, Colkitt handles the lead vocals on the first song “Wildcat” (the pointless “Intro” does not count) and every odd song thereafter. For more clarity, Colkitt sings lead vocals on the title track, “Lil Miss Rosie,” “Simple Man,” “Heaven 17,” and “Medusa.” I have got to admit that I listened to Wildcat way more than I usually would listen to an album that I was not that crazy of for the purpose of this review. The reason for that is Floros seems like a genuine really good guy and definitely poured his heart into Wildcat. That being said, despite many listens and although I have warmed up to a few songs that I originally didn’t like, the same things that bothered me the first time around keep irritating me.

Before getting into the negatives, let’s talk about the positives since there are definitely some standout tracks on Wildcat. Given my penchant for liking the more classic rock tunes on Idora‘s debut EP Above The Law, it is no surprise that the two songs that are slowed down a tad and have the strongest classic rock feel are my two favorites. I am talking about the Colkitt sung “Lil Miss Rosie” and “Simple Man.” Funny enough, I hated “Simple Man” at first with the very basic sounding singing at the beginning of the song but it has quickly morphed into one of my favorite tracks on Wildcat. Other standout tracks are “Greased And Primed” and “Saints & Sinners” which are straight forward rockers built on some cool guitar riffs, gang like background vocals and Floros‘ raspy voice. Another good song is “Heaven 17” which is another classic rock like composition sung by Colkitt.

Unlike Colkitt who I feel has a vast vocal range and can pretty much handle whatever song you give him, Floros‘ vocal registry is much more limited so he sounds like he is really straining himself when singing portions of certain songs. I am thinking in particular of Idora‘s cover of Y&T‘s classic “Go For The Throat.” The inclusion of an instrumental by the way of “Silver & Black” is an interesting choice but one that could have easily been omitted from Wildcat. The drumming reminds me of an early Ace Frehley solo album tune. The instrumental lacks structure and seems to be simply a bunch of musical ideas thrown together. I am not crazy about the sci-fi sounding portion of “Medusa” either.

Overall, Idora have released an album that admittedly keeps getting better every time I listen to it. Who knows? I may end up loving the album if it keeps sounding better listen after listen. Seriously speaking, Wildcat is definitely an album that has grown on me filled with ’80s hooks, melodies and sounds. Accordingly, I would recommend multiple listens of the album and to get used to Floros‘ singing before you might set it aside. Hats off to Mr. Floros for playing all the instruments on the album! If you’re interested in getting a preview of some of the songs on Wildcat and/or purchasing it, go to Idora’s Bandcamp page.