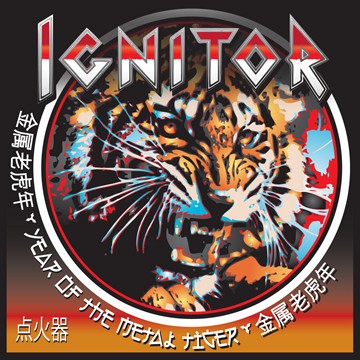 Review:
I received a copy of Austin, Texas based Ignitor‘s debut CD Take To The Sky back in 2004, and it was a complete abomination — there wasn’t a memorable track on the album. At the time Ignitor appeared to be going for a sound that was in the vein of bands like White Wizzard, but singer Erika Tandy didn’t have any charisma whatsoever and made the album a ‘trying’ listening experience.

Fast forward to 2012, where the band is now fronted by veteran vocalist Jason McMaster. While most rock/metal fans recall McMaster from his sleazy, hard rocking days in Dangerous Toys and current AC/DC flavored project Broken Teeth, many forget that he can also sing metal — like he did in Watchtower. Once Tandy was ousted, Ignitor wasted no time in enlisting McMaster and righting the ship with 2009’s The Spider Queen, and while the album didn’t reach the masses, those that heard it had very favorable things to say about the new line-up and the material within.

Ignitor have just unleashed the follow-up to The Spider Queen — The Year Of The Metal Tiger. While the album’s title will send the ‘cheese-meter’ spiking, the music picks up right where the last effort left off. For those that have never heard Ignitor since McMaster took over on vocals, the band has gone from a ‘bland’ power-metal group to a heavily Judas Priest influenced machine. McMaster‘s vocals are an ear shattering, powerful falsetto that will have you asking “why hasn’t he been doing stuff like this all along?” Meanwhile the guitar team of Stuart Laurence and Beverly Barrington complement one another brilliantly — one holds down the fort with grinding rhythm guitar while the other swoops in with blistering leads. My personal favorites on this seven song album are “The Kaiser”, “Heavy Metal Holocaust”, and “Shadow Of The Needle”.

If you’re into classic heavy metal of the New Wave Of British Heavy Metal variety, then Ignitor‘s latest effort this will be to your liking.