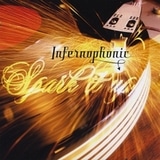 Review:
Sometimes I get the feeling that certain people have picked the wrong profession and/or haven’t found their real calling in life. Take for instance Infernophonic‘s attractive vocalist Elaine Tuttle. She has a voice that matches her beauty, however I don’t feel that it’s a voice made for hard rock. As I listen to Spark It Up I can’t help thinking that she would be better served as a pop vocalist in the vein of Fiona Apple.

That’s not to say that this disc doesn’t rock, there is no denying that Spark It Up is a hard rock album, but it just seems out of place and out of focus. Heavy metal/hard rock has always been dominated by males and it takes a certain voice to be able pull it off and Tuttle just doesn’t have that kind of voice. But she isn’t the only to blame on this album. “Take Aim” for instance is completely off mark and in all honesty a crappy attempt at infusing funk into the band’s sound. “Thank You” is also all messed up, drifting between downtuned grunge and a dreamy chorus. The funk returns with the same substandard results on “Invisible Slaves” and “Hear Me”. And don’t even get me started on the atrocious rap-metal fiasco that is “Eye Of The Jedi”.

There are a few half decent moments on Spark It Up, mostly at the beginning of the disc like the crunchy “Say Whatcha Mean”, “Middle Of The Road” and “Karmakaze”. The Deep Purple inspired “Be Here Now” starts off alright, but once again the vocals seem out of place. By the time “We Don’t Need It” came along I was thinking the exact same thing, but it ended up being one of the better tracks as it ventured into Sass Jordan territory.

Sometimes I feel bad when writing a mean review because I am putting down someone’s dreams and hard work, but honesty is the best policy. And in the case of Infernophonic I honestly think they would have more success as a pop or alt-rock band, because as a hard rock/metal outfit they didn’t impress much. They seem to have an identity crisis as they roam from rock to funk-metal to rap-crap, and all too often with subpar results.