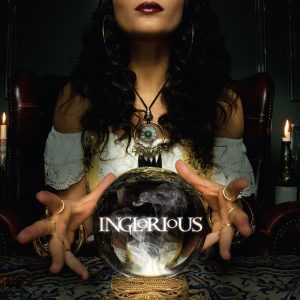 Review:
I stumbled upon this group Inglorious while I was getting the tickets for Steel Panther‘s concert, which will hit Poland somewhere in September. Inglorious will be playing the role of their support act, and thus I wanted to get prepared for their music.

I did not expect I would actually like their debut release they are promoting during their tour with Steel Panther more than I did any of the headliner’s releases. Inglorious‘ self-titled album is a rock solid release mixing a bit of old and a bit of new. Some may say this is an album a young and hungry Deep Purple would record nowadays. That is my subjective impression. The songs here are in a very classical hard rock vein, but with an additional edge,  making it much rougher that any of Deep Purple‘s releases I can recall.

The firs song “Until I Die” actually put me off a bit, but from the second one “Breakaway” — which is actually my favorite on the record — the song quality only soars. Again, as with any album, this one will hardly please each and every fan of hard rock. Some classic lovers might be miffed by the harder sound. But unlike other releases I can think of, there are very few things one might not enjoy about it. The only thing that comes to my mind is that this release is not reinventing the wheel. It is very good, but it is not groundbreaking.  A well chiseled, hardened steel coming in from these young guys.

The vocalist, who particularly shines here, is one by the name of Nathan James. The man behind the mic had leant his skills earlier to such music giants like Uli John Roth or Trans Siberian Orchestra, and on this record, he really showcases why he would have been picked for such high profile guest spots. The guy already grabbed some fame for himself, appearing on a lot of UK broadcasted TV shows like The Voice or Superstar. The only thing you can pin to him here is that his singing does not really differ that much in style from song to song. Apart from that, the dude is brilliant.

The other musicians are also showing that they can play, but a particular light must be set on the sole Scandinavian in the flock, the guitar player Andreas Eriksson, also known in earlier life as Adde Zatta, who was a member of Crazy Lixx for a long time. His riffs and solos give a very solid rock background to James’ vocals. The album credits, apart from the band, indicate that some of th songs were co-written with the likes off Al Pitrelli of Megadeth and Alice Cooper fame, and Joel Hoekstra, who used to play with Night Ranger, and is currently one of Whitesnake‘s guitarists.

My favorite songs here are all of them aside from the opening “Until I Die”, which I kind of cannot get into. If I was to choose only a couple of favorites, I would go with “Breakaway,” “Wake” and “Girl Got A Gun.” But as I said earlier, this release is very stable with no real ups and downs, apart from a slow start (but again, others might have different opinions on that).

All in all, after getting through this record, I have to say that I am very eager to see these guys play their material live. Rarely have I been so psyched to see a opening act, let alone one I did not know of earlier. In the case of Inglorious, I am very satisfied with their debut album, and hoping they will kick ass as much live as they did on their debut record.

Inglorious‘ “Until I Die” video:

‘Until I Die’ is taken from their self titled debut album ‘INGLORIOUS’. Pre-order ‘INGLORIOUS’ from iTunes & get ‘UNTIL I DIE’ & ‘BREAKAWAY’ INSTANTLY! Get …

Inglorious‘ “Girl Got A Gun” video: