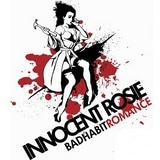 Review:
Raw, rough around the edges and gutsy, the way I believe metal should be. That is the best way to describe the newest release from Sweden’s Innocent Rosie. Bad Habit Romance reminded me of some of the guitar driven bands that came out of the L.A. scene in the late 80’s (Skid Row and Faster Pussycat come to mind). Every song has that gritty, unapologetic feel to it but still maintains a good amount of hook-laden choruses with a whole lot of melody to keep you singing along. This is Rock and Roll the way it was meant to be; no pretenses and no bullshit. Innocent Rosie play their asses off and they have written some damn good music in the process.

Stylistically Innocent Rosie have not necessarily created anything new or groundbreaking, but what they have put together is a series of tunes that are more than enjoyable to listen to and definitely rock the house. Songs worth notable mention are the opener “Bitter Cocktail” and the final track “Left Alone,” all of which are so good I am having trouble deciding which one of I like the best; they all really kick. My favorite track on the record is “Wasteland” which from the very first note the groove seeps into your soul and becomes so infectious, you cannot help but move to it. Most definitely, a tune to be played on a hot summer night cranked to eleven with the car windows rolled down.

The only real criticism I have about this record is that the tune “Shine, Shine, Shine” seems to be lackluster and out of place. It is a slow drawn out tune that seems to have been placed here out of necessity, as with most albums in this genre there is usually at least one power ballad. Whatever the case, I feel this song could have been left off and the CD would not have suffered in the least.

Bottom line, Bad Habit Romance is a good record from a damn good band that we are sure to hear a lot more from in the very near future.