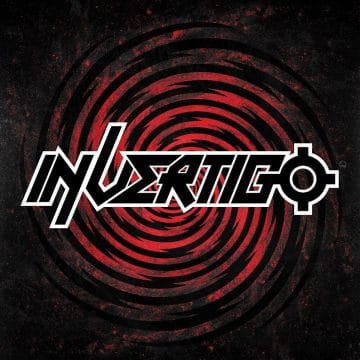 Review:
Three for three — my friend Bruce‘s recommendations have been right on the money so far and all three bands are based out of western Canada, which I would have never thought of to be a hotbed for great hard rock / heavy metal music. I met my friend Bruce at a Famous Underground concert via my friend The Meister back in 2014. Bruce was/is a big Famous Underground fan as I understand that he flew in all the way from Calgary, Alberta to Toronto, Ontario for that show. Although I haven’t see Bruce since that time, we’ve kept in touch via Facebook and Bruce‘s recommendations of Striker and particularly Dextress during the last couple of years have been welcome additions to my music collection and for Sleaze Roxx to cover.

A couple of months ago, Bruce sent me a message stating that he wanted to send me the new In/Vertigo CD. I had never heard of In/Vertigo but let me tell you, this was one incredible band based on the four-song self-titled EP that I have selfishly been listening to on a regular basis for the past couple of months without letting you know about it until now. You might be wondering why I have spoken so much about my friend Bruce. Part of it is that he is three for three in terms of stellar recommendations. Part of it is that we have more in common than he may know. And the last part is that I appreciate all of the Sleaze Roxx readers who from time to time provide a heads up on some potentially new great bands that Sleaze Roxx should be covering.

In terms of In/Vertigo‘s EP, you’ll recall the movie Jerry Maguire featuring Tom Cruise and where Renee Zellweger uttered this famous line: “You had me at hello.” Well, In/Vertigo had me right from my first listen of the opening guitar riff of the opening track “Take It.” After hearing that mind blowing riff, I felt a little bit like at an Iron Maiden concert with Bruce Dickinson stating on Live After Death — “Wait for it Long Beach.” Yes, I was waiting for the lead vocalist Reed‘s singing. Anything half decent would do to make the track “Take It” a good one after that stellar opening guitar riff. To my surprise, Reed’s vocals were simply killer with some bluesy overtones and plenty of range. How good is the song “Take It”? It just might be my favorite track of the year. Perhaps the most surprising aspect of the song is the maturity level exuded by the band members on the song. It’s not your straight up rocker the way that Airbourne might serve up. There’s some complexity to the track with varying tempos but it simply really rocks!

Next up is “Live For Tomorrow” which has a really nice melody to it, some nice background vocals and shows Reed‘s versatility in singing styles. “Keep Your Head Up Child” slows the pace down but not in a ballad type mode but rather a moody rocker highlighted by Reed’s vocals once again. “I Want You” continues the variety that is so prevalent on the EP yet you feel that In/Vertigo have more than found their sound already with these four cool but different tracks. Guitarist Shaddy puts on a bit of a guitar clinic with his solo on “I Want You” as well. How obscure are these guys? It’s only the second time that I can’t find the actual album cover anywhere on the internet to include with a CD review for Sleaze Roxx. It doesn’t help that “Invertigo” is apparently a pretty commonly used word. Given that I was not able to find the front cover of the album, I am going to have to go with the back cover of In/Vertigo‘s EP, which ironically has the band’s name at least while the front cover just has a big purple “V” with another logo apparently on top of it. I am thinking that a little bit of marketing such as displaying your new album’s cover would go a long way for In/Vertigo!

Putting aside these marketing deficiencies, the In/Vertigo EP is simply a stellar collection of four songs mixing classic rock with more up tempo rock n roll and some strong melodies at times. That opening track “Take It” is so good that I just can’t imagine anyone not at least liking the song and most loving the song. If you’re interested in purchasing the album, I suggest contacting In/Vertigo directly because I truly do not know where else to acquire the group’s stellar EP.