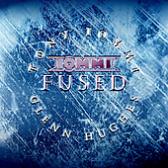 Review:
What happens when you unite the greatest doom riff-master in metal history with one of the most unheralded vocalists/bassists ever? The answer to that question is Fused, a heavy album that teams Black Sabbath‘s Tony Iommi with Deep Purple‘s Glenn Hughes, an album that offers the expected and even more surprises.

I find the chorus of “Dopamine” growing on me with each listen, but it is songs such as “Wasted Again” and “The Spell” that contains the trademark Iommi sound. The aforementioned sounds like a combination of Alice In Chains and Soundgarden, has Hughes ever sounded this much like Chris Cornell? “Deep Inside A Shell” is one of the more mellow numbers, and also one of the better songs here, it has a melody that reminds me of a metal version of Alice Cooper‘s “Wind-Up Toy”.

Even though Fused is touted as an Iommi/Hughes project, I think producer/co-writer Bob Marlette has played a huge part in this recording. The reason I jump to this conclusion is because this album has a lot in common with Alice Cooper‘s Brutal Planet, another album that Marlette helped create. Just like Brutal Planet I find that I enjoy Fused but at the same time am indifferent to it – in other words this isn’t the type of CD I would normally go out and purchase. This is a good release, but these two rock legends have both put out far better material.

One final complaint is that someone with such an incredible and distinctive scream as Glenn Hughes seems rather refrained here – I like it better when his voice is on the verge of collapse. More information can be found at www.iommi.com and www.glennhughes.com.