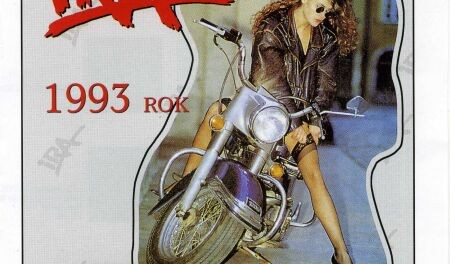 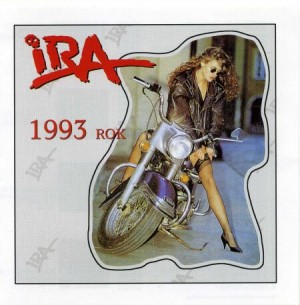 Review:
Ever since getting into hard rock and heavy metal music back in 1984, I have always automatically equated those genres of music with the English language. In other words, the lyrics from these types of bands had to be in the English language. While it might seem ignorant on my part, I have always thought that any worthwhile band or at least its lead singer would learn the English language if it wanted to have any sort of musical career in the hard rock/heavy metal world. Sure, I knew that there must be some groups that perhaps stuck to their own native tongue while playing their brand of hard rock/heavy metal but surely these bands were not experiencing any kind of success or longevity for a sustained time period. My preconceived notions were shattered when Sleaze Roxx contributor and Polish resident Fat Peter recently sent me (thank you Fat Peter!) two albums, 1993 Rok and Mój Dom, from Polish hard rockers IRA.

The first album that I put on was 1993 Rok simply because it seemed that it might be a live album (which it is apparently not) and might contain the band’s “greatest hits.” I was impressed with what I heard. The music on 1993 Rok is straightforward with tasty guitar riffs, a strong rhythm section and enjoyable uncomplicated melodies. It reminds me a lot of Saxon‘s song “Denim And Leather” which always seemed so simple yet magical with its instantaneous recognizable melody and slow but cool pace throughout. IRA‘s music on 1993 Rok is in that same vein. Sure, the singing is all in Polish making my comprehension of what is being sung almost nil but the ’80s era music and melodies are strong enough to make the songs enjoyable to listen to nevertheless.

As I started writing my review of IRA‘s 1993 Rok and did a few searches of the band on the internet, I quickly realized that IRA must be a household name in their native Poland since they have ten studio albums, three live albums and two compilation albums under their belt from 1989 to 2014 with one studio album (Mój Dom) getting certified platinum in Poland while three others (1993 Rok, Znamie and 9) receiving gold certification. In addition, IRA have 14 tour stops presumably all in Poland during the next three months. How many heavy metal bands do you know that play more than one gig in Poland per year? Likely not many but here are IRA touring the country and selling a sizeable amount of records still to this day with their second last studio album 9 reaching gold status in Poland. In some ways, IRA remind me to a lesser scale of Australian hard rock group Powderfinger who had eight multi-platinum selling albums in a row from 1996 to 2009 in Australia (check out their single but apparently none of their albums ever achieved gold status outside the land of Oz.

Getting back to 1993 Rok, my favorite tracks are definitely “Sex” (which title needs no translation) with its simple melody and which could have been a real hit back in the late ’80s/early ’90s, “Szatan” (“Satan” in English) with its faster rocking beat, and “Taki Jestem” (“The Way I Am” in English) which intro has a real ’80s feel to it. There are a few tracks that aren’t quite as good to my ears and that has nothing to do with the quality of the music and melodies but more that lead vocalist Artur Gadowski‘s Polish singing is at the forefront. I am thinking mainly of the ballads “Wiara” (“Hope” in English) and  “Deszcz” (“Rain” in English) where Gadowski‘s singing (rightfully) dominates the songs. If I knew the Polish language, odds are that “Wiara” would be one of my favorite ballads because it almost has a Night Ranger “Sister Christian” magic to it.

IRA appear to be a Polish national treasure that just hasn’t seemingly broken through or tried to break through on an international level. Had Gadowski‘s vocals been in English, I would have to think that IRA would be well known internationally. Whatever the case, IRA‘s 1993 Rok album is filled with solid ’80s style music and great melodies, and is worth checking out if you’re able to get past the singing in the Polish language.