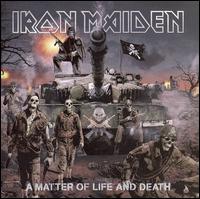 Review:
I’ve been sitting here reading reviews of the new Iron Maiden album A Matter Of Life And Death and seeing how positive just about everyone seems to be on this record. In fact, it was that overwhelming positivity that made me give it a chance as usually the fans are very critical of new works by an established band. They certainly were critical of Iron Maiden‘s last studio release Dance Of Death which I thought had some good points. That said, I don’t see much to write home about in A Matter Of Life And Death.

Don’t get me wrong, I am an Iron Maiden fan, and this record does not change that. But it does make me wonder if I picked up the wrong record after reading some of these reviews.

“This is easily their greatest record yet!”

THIS album garnered that kind of response? A Matter Of Life And Death did? Maybe I should download an illegal copy of this thing to hear what these people are hearing… It simply CANNOT be what I am hearing from my CD player.

Let’s get down to details on what I don’t like about the album.

Most Iron Maiden albums start out with a really strong first song that sets the pace for the record… See “Where Eagles Dare”, “Aces High”, “Wicker Man”, or even “Wildest Dreams”. All were opening cuts off records and set the pace. What pace is a song like “Different World” supposed to set? It doesn’t stand out… It doesn’t grab your attention. It’s just… Well, it’s just boring Maiden with all the elements and no creativity. It certainly is far from “magical.”

It is said that Iron Maiden hasn’t sold out to modern trends, and they are somewhat right about that. Maiden has always been different from the pack. But listen to the first half of this record (if you have a strong stomach) and tell me that they aren’t trying to capture that same Green Day style audience with pop hard rock that is rather annoying. The vocal techniques and such are very much like Green Day. And that, if I’m not mistaken, is bending to a modern trend.

“Bruce can still hit the high notes!” Why yes, yes he can. The problem is he rarely tries to reach any other note! I mean, I read somewhere that this album is very political with a view on the war. But nobody has said what that view is. I’ve listened three times through and I can’t make heads or tales of it either. Why? Because I am tuning Bruce‘s annoying attempt to reach a constant high note out. Forget singing, in conversation there are peaks and valleys in the tone of our voices in a single sentence. Different words garner a different response. This is one constant emotionless high note. It’s almost robotic in the sense that there is little emotion in the vocals… Just a really pathetic attempt to hold the same note throughout the majority of the record. And yes, it does get very old very fast.

I don’t like my music getting political… Why? Well, for one I’ll almost certainly disagree with them as I don’t have the ability of looking at life through the utopia of having my ass powdered every day. I don’t go sit in my private cruise ship on my own man made private lake and write essays on why we shouldn’t go to war or why Americans don’t do enough for poor people. Musicians shouldn’t offer their opinions in song either. They’re pampered and have no idea of what goes on in the real world with every day people, the ones who buy their albums by the way. And you can be sure that regardless what side you take politically, you will put off at least half of your audience by having that view. That said, I still don’t know what stance Iron Maiden has taken here. There is no emotion to this record. None. It’s just… Well, crap. From a band that has released some wonderful music, “crap” doesn’t exactly qualify as their greatest record ever.

Pass on this one folks. Buy something else. Show Bruce and the boys that they have to put as much care and thought into their records that they did in Brave New World. A Matter Of Life And Death is simply a piece of garbage. It has no special meaning and it is a rock band just going through the motions.