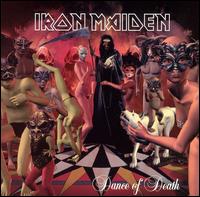 The album starts out with a very upbeat metal tune called “Wildest Dreams”. That sets the stage for an incredible album. There is not one song on the album that I skip over when I listen to it. I can listen from start to finish and enjoy it.

I love the song “Rainmaker”. I can’t explain why, I just keep playing that and the title track, “Dance Of Death”, over and over again.

The cold hard fact of the matter is this, metal fans. If you do download a few songs off the album and enjoy them, buy the album. Show the record companies that if someone releases an album that is worth your $15, you will spend it. Forget all the flavor of the month bands and all the record companies that blame you for the record sales dipping. Forget all bands that even consider suing children, parents, and grandparents for their own personal gain. Show the world that you are capable of buying an album with your heart, your soul and your mind no matter if the media promotes it or not. Who cares if MTV will promote Iron Maiden in 2003? The music they have released is the best that has been released in 2003. Show the world what the secret behind metal is all about, and here’s a tip, it isn’t rap! Take a stand. BUY IT!