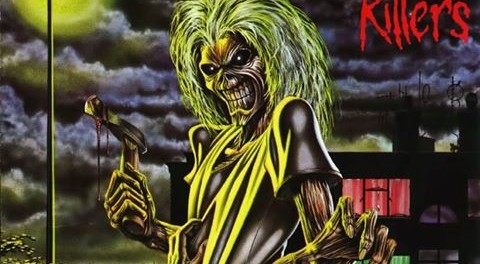 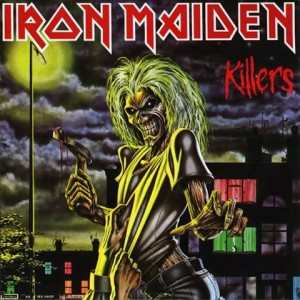 Review:
Today marks the 35th anniversary of the UK release of what has to be considered a heavy metal masterpiece. Iron Maiden‘s second studio album Killers may not have been considered such a great album when it first came out and its songs aside from “Wrathchild” may get little love from Iron Maiden year after year in a live setting but make no mistake about it, Killers is an essential album to the music library of any heavy metal lover.

The song “Aces High” was my first introduction to Iron Maiden and Powerslave was my first album from the iconic group. It all seems puzzling now but it would take me another year and until I heard Live After Death to really delve back into the mighty Maiden‘s back catalog and it probably took another few years for me to really appreciate how good the album Killers was. Unlike Iron Maiden‘s first studio album which sadly sounds quite a bit dated production wise, Killers still sounds fresh and powerful to this day and a lot of credit, if not all of it, should go to producer extraordinaire Martin Birch who went on to produce every Iron Maiden album thereafter until Fear Of The Dark.

Opening with “Ides Of March — one of the greatest “intro” songs ever recorded and one that still from time to time gives me goose bumps to this day — the stage was set for a raw and almost like punk like delivery filled with amazing almost classical like guitar melodies and almost not a whiff of commercialism. Funny enough, I was always puzzled way back when why Iron Maiden‘s most commercial sounding and “accessible” song of that era — “Women In Uniform” — was not on any Iron Maiden studio album. As it turns out, that song would not have really fit onto Killers and it was a wise choice not to include it on the album. As soon as “Ides Of March” reaches its crescendo, “Wrathchild” rushes in and completely justifies why it still gets a regular rotation in Iron Maiden‘s setlist to this day. “Murders In The Rue Morgue” could have been the album opener had the group not had “Ides Of March” because its slow building intro for almost a minute sets the stage for a raucous hold no prisoners rest of the song with a rather simplistic chorus.

“Another Life” starts off brilliantly and almost violently with the intro guitar riff and takes you through twists and turns with one amazing guitar part after another. While one might think that the band cut and paste various guitar ideas into one song, somehow all of these guitar ideas are well incorporated together making one seamless transition from one guitar idea/part to another. “Genghis Khan” had to be written at the time of the first Iron Maiden album because the instrumental filled track with its guitar melodies and overall feel takes you back to earlier Maiden songs such as “Phantom Of The Opera” and “Charlotte The Harlot.” The great songs don’t stop there with “Innocent Exile” which features a cool bass intro and interesting contrast between Di’anno‘s punk like verses and the overall classical feel of the guitar melodies. Next up is probably the best song on the album — the title track — with its amazing start that builds and builds and builds until Maiden kicks into full on fury. One wonders why “Killers” is not a staple in Maiden‘s live set to this day.

“Twilight Zone” is probably the most commercial sounding track on Killers and while the weakest of the album. Of note, it wasn’t included on the UK release of the album but included with the later North American release of the album. That song also highlights how Iron Maiden made the right choice in replacing Di’anno and his limited vocal delivery for Bruce Dickinson‘s operatic like vocal range, which opened the doors wide open for the band songwriting wise. The one surprise on Killers is “Prodigal Son” which reminds me at times of Ace Frehley‘s song “Fractured Mirror” released less than three years earlier and I often wonder if the mighty Maiden might have borrowed somewhat from the Space Ace on that one. Nevertheless, it’s a brilliant off pace song that highlights Maiden‘s quality musicianship. “Purgatory” and “Drifter” get back to what Maiden do best with the outstanding guitar melodies between Dave Murray and Adrian Smith, and both tracks could have easily found themselves on Iron Maiden‘s debut album.

While Killers would be the last Iron Maiden album featuring Di’anno, there is no question that he brought a more punk edge (the irony of course is that Steve Harris really dislikes or disliked “punk” music) to Iron Maiden‘s overall sound and he will always have a strong place in heavy metal history simply based on his contributions to the group’s first two studio albums and overall sound.

What’s truly incredible about Killers is that most of the songs are reportedly leftover material from the time of Iron Maiden‘s debut album. I am sure that many heavy metal band members would give an arm and a leg to be able to come up with the “leftover” material that would become arguably one of the best Iron Maiden albums ever released.