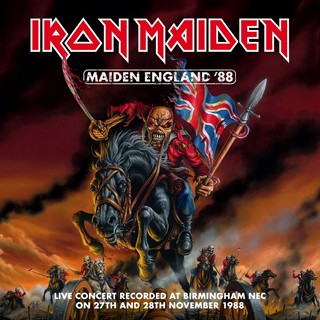 Review:
As I purchased my umpteenth live Iron Maiden DVD, I began to wonder why I keep buying another version of all these songs that I already have? The reasons are simple. First of all, it is from the mighty Iron Maiden, a band that keeps setting the bar for how heavy metal is to sound and be played. Second of all, the list of songs on the Maiden England ’88 concert is absolutely killer, with tons of my favorite Iron Maiden tunes including “Killers”, “The Prisoner”, “Die With Your Boots On”, “Wasted Years” and “Hallowed Be My Name”. Finally, I have been waiting for ‘Part 3’ of ‘The History of Iron Maiden’ ever since I purchased the Live After Death DVD more than five and a half years ago.

Iron Maiden‘s ‘Seventh Tour Of A Seventh Tour’ was, in my opinion, one of their best ever so having it captured in Maiden England ’88 is a real treat. As previously stated, the set list is a killer one with most of the band’s greatest hits from that era being played. I’m actually not that crazy about how the concert was filmed, as it is apparently recorded from a fan’s viewpoint — mostly from the general admission section. You end up looking up at all of the band members for a good portion of the DVD. I also find the lighting and color does not do justice to Iron Maiden‘s light blue backdrop that emphasized the Seventh Son Of A Seventh Son album cover. Having seen the tour in question back in 1988, and a couple of times again back in 2012 with the ‘Maiden England World Tour’, it seems to me that the light blue backdrop seemed a lot more prevalent at those shows than what is depicted in this concert DVD. Nevertheless, Maiden England ’88 is still quite enjoyable and the songs that were played make up for whatever I do not like about the filming techniques. Keep in mind that most of the concert was already released by the band back in 1989 simply as Maiden England.

The real gem here, and really the only all new substantive material, is of course ‘The History Of Iron Maiden Part 3’, which I found a little short clocking in at only 40 minutes. I look forward to ‘Part 4’ and hope I don’t have to wait another five years before it comes out. The remainder of the extras included here are not that special. The five promo videos for the Somewhere In Time and Seventh Son Of A Seventh Son CDs can all be found on Iron Maiden‘s Visions Of The Beast DVD which came out back in 2003. The ’12 Wasted Years’ portion of Maiden England ’88 was originally released back in 1987 and shows various band concert footage that can already be found in one form or another on other Iron Maiden DVDs, including The Early Days.

Ultimately, I am happy that Iron Maiden re-packaged some of their earlier videos, such as ’12 Wasted Years’ and ‘Maiden England’, and are offering them in one DVD along with ‘The History of Iron Maiden Part 3’ — since I had never seen the two former full-length videos before. I look forward to the next Iron Maiden live package — along with ‘Part 4’ of the Iron Maiden story.