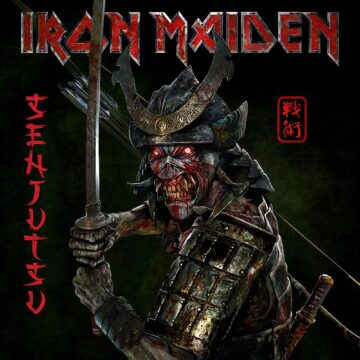 Review:
Iron Maiden are one of the few bands that I have followed without fail since first discovering them in 1984 no matter what line-up changes that they have undergone (including losing Bruce Dickinson for five years or so) or musical climate (the dreaded grunge genre) that they had to navigate through. I was in the rather sparse 4,000 or so in attendance when the heavy metal veterans played a section of the Air Canada Centre in Toronto, Ontario, Canada on August 1, 2000 and got to see them rejuvenate their music career rather quickly to become one of the biggest heavy metal concert draws in the world in the last 20 years or so. There is no need to say that I will shell out whatever money needs to be paid to purchase Iron Maiden‘s latest studio album or to catch them in concert one more time before Father Time catches up to them.

While I don’t think that I would characterize any Iron Maiden studio album as a “bad” one, it does seem that Maiden‘s better days are behind them when it comes to releasing new material. Although the last three albums — A Matter of Life And Death (2006), The Final Frontier (2010) and The Book of Souls (2015) — had some good songs and decent moments, none of those albums have produced, in my opinion, a standout song that became a mainstay in the band’s live set. Frankly, that’s kind of the test for a group of that stature when it releases a new studio album. I don’t expect Maiden to come up with an album on par with The Number of The Beast (1982) or Powerslave (1984) at this stage in their career but if they can come up with one new track that can be played alongside their usual classics and last more than just one studio album cycle, that has to be considered a success at this point.

Upon hearing Iron Maiden‘s first single “The Writing On The Wall”, I knew that the band had likely achieved what I was hoping for with a strong single that could become a mainstay in its live set for many years to come. Funny enough, the reactions seemed to be mixed for the Southern rock tinged new single but if you really listen to the song, you’ll hear that it is tailor made to be played live with excellent melodies, a nice build up throughout the track, some almost obvious “raise your fist in the air” moments, and an easy to sing along to chorus. Had Iron Maiden been able to come up with more fantastic songs such as “The Writing On The Wall” on Senjutsu, we would be talking about the top album on the Sleaze Roxx’s Top Ten Albums of 2021. Alas, the second single “Stratego” didn’t have the same feel and excitement as the first single and really gave a sign of things to come for the rest of the album.

It’s not that any of the rest of the songs off Senjutsu are bad ones because in fact, they are all enjoyable to listen to with that unmistakable Maiden sound but there is nothing that really sticks out after “The Writing On The Wall.” The opening and title track “Senjutsu” is a slow plodding track that while saved by Dickinson‘s terrific voice would sound likely very flat with another singer that didn’t have the latter’s vocal range and power. “Lost In A Lost World” reminds me a bit of the guitar sounds off The X Factor except with Dickinson‘s voice rather than Bayley‘s as the distinguishing factor. I could see this one being played live in support of the album once Maiden finally end what can only be described as a triumphant and very successful Legacy of The Beast World Tour.

The real issue with Senjutsu is really the length on so many of the tracks. Three songs — all Steve Harris penned tunes — top the 10 minute mark (“Death of The Celts” at 10:20, “The Parchment” at 12:39 and “Hell On Earth” at 11:19), five top the eight minute mark and seven top the seven minute mark. By contrast, there were only five out of 11 tracks on 2015’s The Book of Souls that topped the seven minute mark although the band clearly did not know when to end the last song off that album given that “Empire of The Clouds” clocked in at a whopping 18 minutes and one second. 2010’s The Final Frontier had six of its ten tracks top the seven minute mark but only one went over 10 minutes (“When The Wild Wind Blows” at 10:59 in length). I would have liked to see Iron Maiden come up with some shorter tracks on Senjutsu but unfortunately, every new Maiden studio album seems to compete against the previous one in terms of overall average song length. It is no fluke that the most memorable tracks off Senjutsu are the three shortest ones consisting of the two first singles and the “very short” (by Maiden‘s standards these days) “Days of Future Past” which clocks in at four minutes and three seconds.

As much as I have complained of the length of Maiden‘s newer songs, the reality is that although they tend to never end, they are still enjoyable to listen to because the band still knows how to craft great melodies and provide interesting twists and turns throughout their “epic” tracks. Out of the three ten plus minute opus, my favorite is “Death of The Celts” which builds up really nicely and showcases just how good of a singer that Dickinson is even at 63 years of age. I even enjoyed the four plus minutes worth of guitar solos during the middle of the track!

In terms of where I rank Senjutsu in Maiden‘s discography, I think it’s definitely better than the last three studio albums — A Matter of Life And Death (2006), The Final Frontier (2010) and The Book of Souls (2015) — but it doesn’t come close to Brave New World (2000) or Dance of Death (2003). Given that Senjutsu is Maiden‘s best studio album in their last four offerings, I have to conclude that Senjutsu is a return to form in some ways for the mighty heavy metal veterans and with “The Writing On The Wall”, they have at least one song that can stand toe to toe with many of their classic tracks. Hopefully, Iron Maiden have one or two more studio albums in them before Father Time catches up to them.