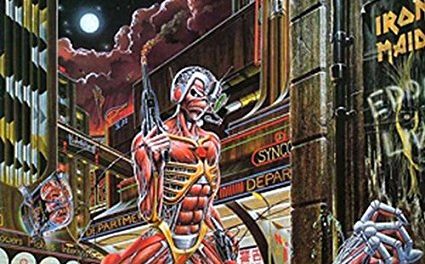 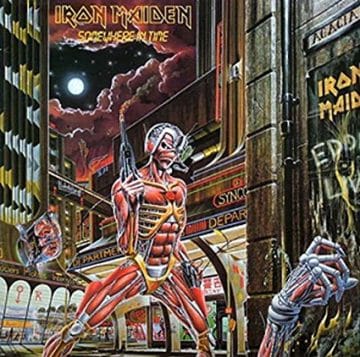 Review:
Today is the 30th year anniversary of the release of Iron Maiden‘s classic album Somewhere In Time, which I think boasts one of the all-time greatest album covers. I don’t usually comment on album covers but the one for Somewhere In Time was so cool and I remember how fun it was to identify all the various past Maiden references on both the front and back covers such as “22 Acacia Avenue”, “Aces High Bar”, etc.

Just like just about every heavy metal band in the mid-1980s, Iron Maiden incorporated synthesizers and/or keyboards into their sound. Unlike many of their heavy metal contemporaries that simply went overboard with the keyboards and/or going glam such as Mötley Crüe with Theater Of Pain and Quiet Riot with QR III, Iron Maiden did soften up their sound via guitar synthesizers but with amazing results.

Song for song, Somewhere In Time remains one of my favorite Iron Maiden albums. It is also probably the most “soothing” Maiden album as the guitar and bass synthesizers throughout the record take away the heavy metal edginess that could be found on prior albums such as Piece Of Mind, The Number Of The Beast and Powerslave. Nevertheless and unlike all of their contemporaries that started incorporating keyboards and synthesizers in a big way, I never felt that Iron Maiden sold out with their use of guitar synthesizers on Somewhere In Time simply because they utilized them so well.

Many of the tracks on the album such as “Caught Somewhere In Time,” “The Loneliness Of The Long Distance Runner” and “Alexander The Great” had a real epic feel to them. The guitar synthesizers seemed to enhance the various melody lines that Iron Maiden came up with. Nothing was more prevalent in that regard than the first single “Wasted Years” which continues to be a crowd favorite and perhaps one of the easiest Maiden songs to sing along to. The one disappointment with Somehere In Time was the group’s choice for its second single. I have always found “Stranger In A Strange Land” — although an enjoyable song — to be the weakest track on Somewhere In Time so the fact that Iron Maiden released it as the second single and shot a video for it was quite disappointing. There were simply way better tracks that could have been featured including the album opener “Caught Somewhere In Time” and “Heaven Can Wait” the latter whom was an Iron Maiden concert staple for the longest time. Iron Maiden also proved that less is more with Somewhere In Time since all eight songs on the album were quality tracks. I have always felt like “Sea Of Madness” and “Deja-Vu” were underrated tracks that never got their just due.

Overall, Iron Maiden came up with one of their most consistent albums in Somewhere In Time and unlike many releases from their heavy metal contemporaries that started using keyboards and synthesizers at that time, it does not sound dated 30 years later.

Track List:
01. Caught Somewhere In Time
02. Wasted Years
03. Sea Of Madness
04. Heaven Can Wait
05. The Loneliness Of The Long Distance Runner
06. Stranger In A Strange Land
07. Deja-Vu
08. Alexander The Great