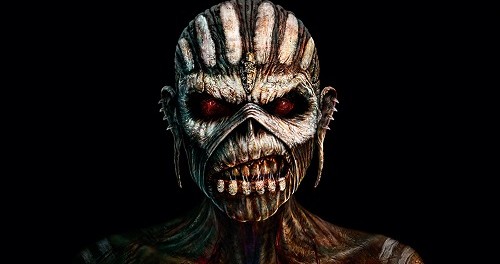 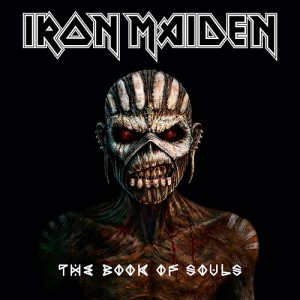 THE BOOK OF SOULS
Released on September 4, 2015 (Parlophone / Sanctuary Records)

Review:
Iron Maiden — What more can be said about this band that hasn’t been said before? For some unknown reason, this is the band that brings together just about every hard rocker and metal head, no matter their personal preferences. It’s of no importance if you’re a fan of sleaze, speed, thrash, death, or any other sub-genre, for when Iron Maiden is discussed, common ground can almost always be found.

Opinions regarding their previous three efforts, Dance Of Death, A Matter Of Life And Death and The Final Frontier have been divisive. A fact that likely didn’t help with fan expectations when Iron Maiden announced a double record with three tracks clocking at over 10 minutes, not to mention the uncertainty brought by vocalist Bruce Dickinson’s recent tongue-cancer survival. What then, does this veteran band offer with its sixteenth studio release? Simply put, a 92 minute extravaganza that constitutes their best album, alongside with the universally loved Brave New World, from Dickinson’s second era with the band.

Let me start by encouraging you to get the Hardcover Book edition because as you will open it and flip through the pages, you  will not be able to help but appreciate the effort put into it. The quality and care in every detail is quite impressive and completely worth the extra money. The book and art reminds me strongly of Anchor Bay’s 2002 excellent Book Of The Dead limited DVD edition of the Evil Dead film.

On to the music! As with most of Maiden’s recent efforts, The Book of Souls gets better with every spin, as you progressively discover all its intricate layers and machinations. The first song “If Eternity Should Fail” serves as an introduction of sorts for the album and begins with what on first listen, sounds like an awkward introduction that lasts about a minute, but it quickly moves into familiar territory with excellent riffs and vocals. Even though bassist and band leader, Steve Harris, has declared that The Book of Souls is not a concept album, by the end of that first track you’re introduced, via lead singer Bruce Dickinson narrating, to Necropolis — an entity formed of the dead and a harvester of souls from which subsequently all songs seem to emanate.

Immediately after comes the first single “Speed Of Light” which is full of the beloved back-and-forth between drummer Nicko McBrain and Harris, serving as perfect example of vintage Maiden, galloping like it’s the ’80s all over again. “The Great Unknown” follows, carrying an amazing bass and guitar introduction that uses all the accustomed contraptions to become a soaring Iron Maiden style metal opus. “The Red And The Black” is the first track clocking over 10 minutes, and as expected, it’s slightly more progressive reflecting of their more recent material. It starts and finishes with a Spanish sounding acoustic guitar and includes some of Dickinson’s famous chants. The track combines elements of Iron Maiden’s different eras in a very effective manner.

“When The River Runs Deep” turns the record back to the ’80s mindset — fast paced and relentless with amazing guitars and drums throughout. The last track on the first CD is the second magnum opus piece “The Book Of Souls”, and it sees Maiden changing paces with an ease I don’t remember hearing before, progressively building to mid-tempo using sounds that make for a very mystical sounding piece that perfectly closes the first half of the experience.

Nods to the past return with “Death Or Glory”, a song I can already imagine being played live to the sing-along of thousands of fans and probably the most old school in the entire album. Oh, but things don’t slow down there, because “Shadows Of The Valley” doesn’t fall far behind. In “Tears Of A Clown,” Dickinson uses different tones that reminds me of some of his solo work during his time off from the band — unusually paced and extremely catchy — which shows a band not afraid to try something new. The more harmonic “The Man Of Sorrows” ensues, delivering more greatness from all involved.

The heavy metal magnum opus “Empire Of The Clouds” closes the records and is a brilliant song that represents Iron Maiden’s forty-year long career like no other could ever had. It’s a daring journey that goes from symphonic to heavy to neoclassical to progressive, all in between and back again with freedom and confidence. I simply can’t express enough the importance of this track closing the album. Whomever chose the song order is in big part responsible for The Book of Souls being this masterful. If nothing else, it succeeds enormously in pace, but not only that because it offers something for every Maiden fan out there.

A bow must be made to Iron Maiden for making a record like this one, taking big risks at a point in their career where they could be playing it safe (i.e. AC/DC). This an album from a band with forty years of experience making heavy metal music, whose dependable track record and undeniable influence has reached millions; a band that once again proves that they’re all about the music, not selling t-shirts, accessories or trending on social media. This is Iron Maiden!