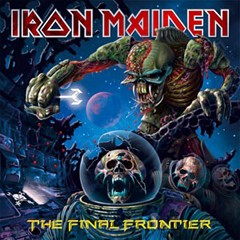 Review:
There are a lot of things you can say about Iron Maiden. Some might say that they are getting schematic (especially on their recent releases), some might get irritated by their galloping bass lines, and to top it off they have a singer that some people (including Ozzy Osbourne) deem pretentious. But one thing you can’t deny is that this band is relentless.

Even though Iron Maiden have been active for more than 40 years now, and are believed by many to be co-creators that helped elevate the entire New Wave of British Heavy Metal style, they have not decided to give up and just earn millions hitting the road every year under the banner of the endless ‘farewell tour’. These dudes still keep on recording new albums, which get a lot of attention and good vibes from both fans and critics alike. No cover albums, latest & greatest or any other shit like that — the Maiden band keeps rolling on as a living/breathing rock-metal machine, and their latest delivery The Final Frontier only proves this fact.

The Final Frontier is a very rocking record — and by rocking I mean it is far less metal, galloping and pompous than the type of music Iron Maiden was known for playing in the ’80s and throughout the vast majority of their career. Of course this CD it still Iron Maiden, with their style visible in some parts of the songs and Bruce Dickinson‘s signature vocals, but this record is much more in the vein of their No Prayer For The Dying album rather than Fear Of The Dark or any of their classic metal offerings. It is clearly a nod to hard rock, and a bit of a venture out of the metal realm.

The first single “Eldorado” really resembles their hit “Bring Your Daughter…”, while other songs that stand out on this album are “Isle of Avalon”, “Satellite 15… The Final Frontier” and “When The Wild Wind Blows” — all of which are basically brilliantly composed rock numbers, only served with Iron Maiden seasoning.

Altogether Iron Maiden‘s The Final Frontier is a very well executed record — one that not only classic metal nuts will dig but that Maiden fans will swallow without a single complaint. It can also bring a lot of fun to sheer rock fanatics as it has enough balls to fill a dozen pool tables, well written melodies and good production. If you are a rock fan you will enjoy the well written tunes and technically terrific musicianship… and if you can withstand Bruce Dickinson‘s wailing manner (yes, I sometimes have a beef with his style) I suggest you go get The Final Frontier — Ozzy would!