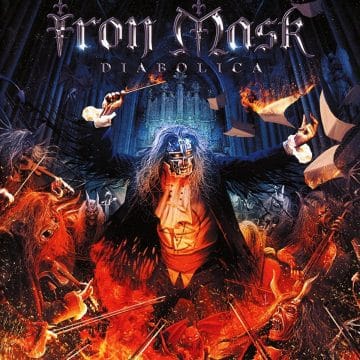 Review:
Dushan Petrossi is back with the sixth Iron Mask album, Diabolica. I was very skeptical about this release because of the Belgian’s previous Iron Mask record, Fifth Son Of Winterdoom, which was not good at all.

For this album, we get another line-up change in the form of singer Diego Valdez from Helker, which is no surprise there since Petrossi changes singers in his bands (Magic Kingdom and Iron Mask) at the same rate as he changes underwear. Well, this time I really hope it lasts because as soon as Valdez appears, it’s clear why he was picked to replace Mark Boals, as his vocals are much superior and fit perfectly with the traditional power metal style of the music.

This being a review of the album Diabolica, I don’t want to go too deep into it, but I have a lot of mixed feelings about Mark Boals‘ work through the years. He’s one of those singers that navigate through bands replacing other vocalists (who are often much superior singers), lasting a few records — if that — and then moving on to do the same elsewhere. That being said, Boals also once in a while has a brilliant record with a project/band here and there where he really delivers outstanding vocals. This seems to be a small trend in heavy metal since there are others like him. I call them ‘navigator singers’ and they tend to do this a lot. Tim “Ripper” Owens is another one of them. They simply seem unable to find a ‘home’ band and stick to it.

Anyway, we’re talking Iron Mask and Valdez here, the latter whom I wasn’t familiar with before this album. He’s really impressive and his vocals are naturally high, clear, and very strong, with good range. The songs in Diabolica are all from good to great. I especially like “Oliver Twist,” “The First And The Last”, and the metal anthem “All For Metal.” The lyrical themes are, as usual in Petrossi‘s work, fictional, fantastical, and historical, taking inspiration from many sources. By reading the titles of the songs, you can easily discern what it’s all about.

Diabolica is not an album that’s going to change the power metal landscape, nor does it ever set out to break any new ground for the band, but it does re-establish the group’s roots after the disappointing Fifth Son Of Winterdoom. It’s a display of high quality neo-classical melodic power metal in the style that Petrossi has become known for. It’s full of impressive riffage and his signature neo-classical guitar solos, with the addition of Valdez to the line-up improving things considerably.

Hordes Of The Brave where Goetz “Valhalla Jr.” Mohr and Oliver Hartmann were responsible for singing duties remains my favorite Iron Mask record to date, but with so much in its favour, Diabolica ends up being one of Iron Mask‘s better efforts to date. If you’re into this style of metal, you’re sure to enjoy Iron Mask‘s Diabolica.