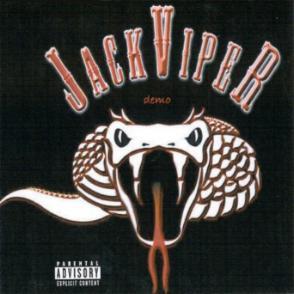 Review:
“Putting the sleaze back into rock n roll”, London’s JackViper claims to be “presenting a middle finger to the London art-rock scene”. I have no clue what art-rock is, but it sounds like pretentious bullshit to me – and chances are JackViper‘s raunchy rock would fit like a square peg in a round hole.

There are only three songs represented here, but all three are top-notch. Fans of Bang Tango, Cherry St and even Broken Teeth should enjoy these demo tracks. In fact this sounds a lot like Bang Tango without the funky bass (due mostly to Jay R‘s Joe LeSte sounding howl), so in other words it sounds like Bang Tango‘s latest album Ready To Go. But whereas Ready To Go fused 80s rock with current sleaze, JackViper fuses 80s rock with…umm, 80s sleaze!

I’m not sold on some of the gang vocals on the chorus, and the drums have a very tinny sound, but these are minor complaints for a first effort and nothing a little guidance in the recording studio couldn’t fix. JackViper has released a demo that they should be proud of, and each of the songs was so good I really couldn’t pick a favorite. To get their name out there the band is also offering free copies of this EP, and I suggest every sleaze fan hit them up for a copy. Slide on over to www.jackviper.com for samples and details.

JackViper is another new band to keep an eye on. A full-length album should be a treat as the boys do their best to bring classic sleaze back into the spotlight.