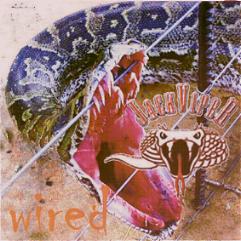 Review:
Like the shits after getting food poisoning, JackViper just won’t go away! It seems like everytime I pick up the mail these English sleaze merchants have slid in another collection of demos. However unlike a raging case of the runs, new JackViper music is something I actually look forward to.

Wired is JackViper‘s third demo EP, but this time we only get two new songs. Two songs filled with enough swearing that there is no way in hell of hearing them on any radio. Usually songs laced with profanity come across as contrived in their effort to offend (anyone remember Brides Of Destruction‘s “Shut The Fuck Up”?), but that isn’t the case here. These two tracks are excellent, mixing Bang Tango vocals with pure sleaze rock. “G.F.Y.” (which stands for ‘go fuck yourself’) and “Murder City Blues” both go for the throat and are full-throttle unrelenting rockers.

JackViper just seems to get better and better and are easily one of the most exciting sleaze bands around today. I’d love to see them release a full-length, but in the meantime they can continue to plug my mail box with venom spitting rock. Once again go to www.jackviper.com and hear what new music should sound like.