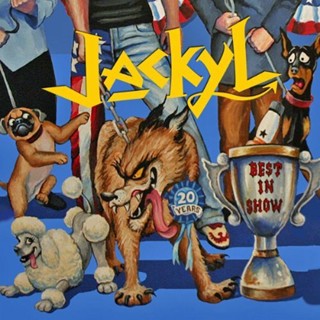 Review:
One thing that has made me an avid Jackyl fan over the last twenty years has been their unwavering dedication to hard rock, regardless of how unfashionable the genre was. Of course the Georgia rockers have always been plagued with their fair share of ‘filler’, but the band’s latest full-length album Best In Show takes their flaws to an uncomfortable level.

The humor and juvenile politically incorrect attitude remains here in spades, but to me Best In Show feels like a collection of too many disjointed ideas. The opening title track and “Eleven” aren’t bad rockers, but they’re plagued by a fuzzy wall of sound and an amateur production that makes them both heavy and difficult to listen too at the same time. “Encore (It Makes My Bic Dig Her)” is laughable in its lyrical content and thumping bass, but it doesn’t make my ‘Bic Dig Her’ (say it fast) and if anything comes up limp, while “Horns Up” uses a similar lyrical approach and once again misses the mark. There is also a rendition of Dr. Hook‘s “Cover Of The Rolling Stone” that in and of itself is fine, however for the first time in Jackyl‘s career their chainsaw solo doesn’t fit the song and comes across as an afterthought. And should I even mention the rap/rock travesty that is “It’s Tricky”? Maybe there is a reason why the song is added as an untitled bonus track.

Not everything is disappointing during Best In Show, as Jackyl offer up plenty of hard rocking and irreverent moments, none more impressive than “Better Than Chicken” with its chorus of “I like poontang better than chicken, I like laughing better than bitching”. The album’s first single “Screw Driver” is a hard driving number that will be a welcome addition to the band’s energetic live shows for years to come. “Favorite Sin” is one of the album’s better efforts as it captures the simplistic foot on the gas recipe that Jackyl has employed for two decades now. And for a band that has consistently snubbed their noses at ballads, when they finally do attempt one with “Don’t Lay Down On Me” they do a pretty good job.

The problem with Best In Show seems to be a lack of focus which results in this album sounding more like Jesse James Dupree‘s 2000 solo album Foot Fetish than classic Jackyl. That isn’t entirely a bad thing, but when comparing this disc to their self-titled debut or Push Comes To Shove the word ‘best’ doesn’t really cut it.