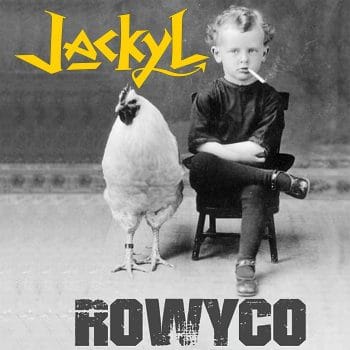 Review:
It’s been four years since the last Jackyl record [2012] Best in Show. That album didn’t prove to be a formidable follow up to the band’s stellar [2010] Moonshine & Dynamite. The aforementioned was on par with the band’s [self-titled] debut album. That’s hard to top. When a band is an established, veteran act like Jackyl; the expectations are simply higher.

If you’re familiar with Jackyl, they are the quintessential blue collar, no frills, rock ‘n’ roll band. Jesse James Dupree & Co remind you of AC/DC sonically; clearly Jackyl have been cut from the same cloth and they wear their [AC/DC] influence proudly on their sleeve.

While Jackyl have been often predictable; they have thrown us a few curves over the course of the past two releases. On Rowyco [Rock Out With Your Cock Out], the band throws us a Hot Chocolate cover “Everyone’s A Winner.” At first, it seems kinda lazy and sluggish but after a couple of listens, it grows on you. Jackyl have been accused of being raunchy, vile and just plain distasteful. Songs like; “Limpdick,” “All Night Rodeo,” and “Just Because I’m Drunk” won’t help to repair their public image. At this stage in their career, I don’t believe Jackly care nor should they — it’s what makes them Jackyl. The aforementioned are killer cuts regardless of how pedestrian or juvenile the content might be.

My final verdict on Rowyco is that it’s a step up from Best In Show but doesn’t make you forget how incredibly good Moonshine & Dynamite really is. Of course there’s the classic stuff but that’s a given. “Rally” what I consider my least favorite track on the album with it’s obnoxious, repetitive chorus is still somewhat brilliant because once you hear that chorus you can’t get it out of your head. Well done Jesse James Dupree.