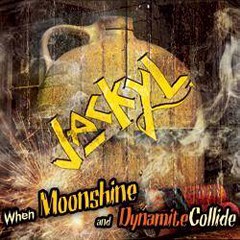 WHEN MOONSHINE AND DYNAMITE COLLIDE
Released May 4, 2010 (Mighty Loud Entertainment)

Review:
Well, ‘rock me… roll me… Jackyl me off’! Those crazy, long-haired, sleazy rockers from Atlanta are back with another ‘goes to 11’, balls to the wall album chocked full of all things dirteee (misspelling intentional, see their 1992 song “Dirty Little Mind” if you don’t get it) and fun. So fire up that BBQ, grab a 12 pack of Pabst or a Mason jar of your best home brew, and sit back for a run through what I feel is the best album Jackyl has made to date.

We kick off this twelve song, forty minute slab of Southern hospitality with the appropriately named “Loads Of Fun”. The song kicks into high gear from the get-go and never lets up. Complete with a stanky chugging riff and gang vocals, I can see this cut being the opener to a Jackyl live show in the very near future. While we are here, I have to wonder if someone wasn’t getting in touch with their inner Chuck Berry during the solo? One thing I’ve always loved about Jackyl is the fact you know their songs are autobiographical, not only do they give you the blueprint to a good time but you know damn well these cats live it up if you’ve ever been to one of their shows. Which brings us to “I Can’t Stop”, another party inducing anthem that carries on that tradition. “She’s Not A Drug”, the first video released from this CD, and “My Moonshine Kicks Your Cocaine’s Ass” have both been available via the band’s MySpace page for awhile now. The later has been a staple of Jackyl‘s live shows for a few years and is a barn burner. Chris Worley‘s breakneck drumming sets the pace for the song and it never lets up. “Get Mad At It” finds Roman Glick laying down a sweet groove throughout while Jeff Worley rips one hell of a solo — I can envision this track making a very nice stripper anthem. “The Overflow Of Love” continues the long Jackyl tradition of celebrating all the things we love about the female species.

I was really thrown a curveball when the title track came out of the speakers, as I fully expected a song with a name like that to be a hyper frenetic hell-raiser of epic proportions — however it is an introspective and mellower piece complete with a soulful guitar solo. But don’t dare call it a ballad even though I can picture the crowd turning the venue into a Bon Jovi video with Zippos ablaze when it is played live. “Just Like A Negro” is sure to raise some eyebrows because of its title, and I can even see some idiots trying to claim that since Jackyl is from the South that they’re being racist, but if that were to happen it would prove their ignorance as this one is actually a cover of a song by the multi-racial band Mother’s Finest. Jesse James Dupree adds his stamp to this rocker which is a sweet grooved lil’ ditty — and it too has been a staple of the live show over the last few years.

The highlight of When Moonshine And Dynamite Collide, for me, comes with the inclusion of “Deeper In Darkness”. This song first graced my ear drums when I saw Jackyl back in 1994 and it also made an appearance on their 1996 import-only live album Night Of The Living Dead. The band FINALLY laid down a studio version and it lives up to all my expectations — I guess sixteen years was worth the wait. “Freight Train” picks the pace back up like a Moonshine fueled locomotive screaming down the tracks with Jesse James Dupree‘s hands free of the controls. Up next sees the second cover from this helping of Southern sleaze rock with an odd choice in Janis Joplin‘s “Mercedes Benz” — clocking in at 1:39, this rendition finds Jesse, dare I say, singing a-cappella. This CD ends, appropriately enough, “Full Throttle”, which is a nice tie-in/plug for Jesse‘s TV show that airs on Tru TV, and it makes for an even better song which is saying a lot considering I love the hell outta that show. This cut is for all of those who like to ‘put it in the wind’ as Jesse says.

Jackyl, in my opinion, have never sounded better all the way around. This is, without a doubt, a result of being the road dogs they are — on stage is where these guys are at home, but it was nice that they took the time to hit the studio as their last effort, Relentless, appeared back in 2002. When Moonshine And Dynamite Collide showcases the band doing what they do best, writing anthemic, hook-laden songs to make you forget about everything but having a good time. As always, the band really has a fire under their ass to provide you with the soundtrack to life’s party and with this CD they do not disappoint. I can’t wait to see them live again on June 3rd in Wichita, Kansas.

In closing, all I have to say is ‘Puh-Pow’ and crank this mofo all the way up!

Reviewed by Justin ‘Crash’ Crafton for Sleaze Roxx, May 2010.