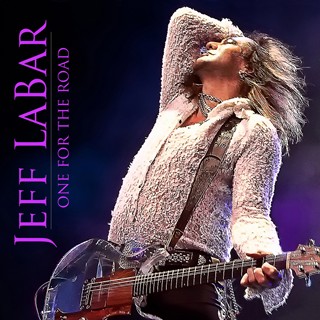 Review:
I’m sure most people view Tom Keifer as the mastermind behind platinum rockers Cinderella — and rightfully so, considering he was their principal songwriter. That’s why a Jeff LaBar solo offering was so intriguing, because we could finally hear what the guitarist was capable of in terms of composing songs and bringing them to life.

I really wasn’t sure what to expect, not only because we’ve never really been exposed to LaBar‘s songwriting until now but also due to never having heard him sing lead before. Thankfully One For The Road proves that LaBar is far more versatile than your typical ’80s metal shredder as the musician offers a short yet satisfying slab of hard rock. If you’re looking for the classic Cinderella glam rock sound, or even their later blues based influenced compositions, you may find One For The Road to be a disappointment because it doesn’t have much in common with any Cinderella era.

While spinning One For The Road you may make several unsuspecting comparisons. “Asking For A Beating”, a far from romantic song about love gone bad, has a riff that reminded me of the Scorpions “Bad Boys Running Wild” but is far from a direct copy. “Asking For A Beating”, as well as “Nightmare On My Street”, are far heavier than I expected from this solo release — and a welcome throwback to the early ’80s metal sound. Sandwiched between two throwaway acoustic instrumentals is “Hello Or Goodbye”, a ballad that contains the type of harmonies you would find on FireHouse‘s multi-platinum debut. Arguably the EP’s shining moments bookend the album in the form of the Alice Cooper reminiscent “No Strings” and the shuffling closer “One For The Road”.

Usually when rock musicians release solo albums they use them as an outlet to explore influences that don’t fit within the confines of their respectable groups. While One For The Road has little in common with the Cinderella sound, it undeniably plays to the same audience — fans of hard rock music. Jeff LaBar displays his guitar chops every chance he gets throughout this EP, but also shows us he is more than capable as both a singer and songwriter. If Cinderella ever do decide to release another studio album some of LaBar‘s straight-forward rock compositions would be a welcome change of pace.