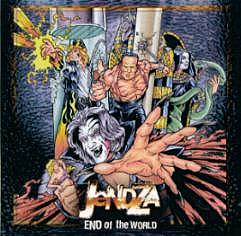 Review:
The fourth album from this Detroit quartet is hard to review, as the sounds are all
over the place. You have to admire a band such as Jendza who aren’t afraid to
take chances, even if some of the results are lackluster. At times I get the feeling
that this is what Diamond Rexx would have sounded like if they formed in the
year 2000, it has that same spooky and sinister vibe.

The disc starts off with its shining star “Shortcut To Hell”, a song
reminiscent of Rob Zombie but with a cleaner guitar sound and a chorus just
drooling with attitude and urgency. “Friend” is a haunting ballad, while “It’s
Hard To Be A Boy” is a cool up-tempo rocker complete with a great piano addition.
“Boulevard” sounds a lot like one of Warrant‘s ballads, in fact the vocals
sound so much like Jani Lane it’s uncanny. Actually the entire second half of
this album is where Jendza really shines and ends on the sing-a-long chorus
of “End Of The World”.

The only time the album really falters is on “Say It”, in which Jendza
attempts a Biohazard type sound that just doesn’t suit them at all. It’s hard
to know who to recommend this album too, as the band seems to run the gamut of musical
styles. They have opened for acts such as Alice Cooper, and with their
vampire painted faces the band could appeal to both rockers and Goths alike. Take a chance
with Jendza, you might be pleasantly surprised. Contact the band on their official
website.