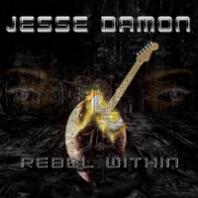 Review:
Let me start off by saying that I have never heard music from Jesse Damon or his previous band Silent Rage before, so I have no preconceived notions of what Rebel Within should sound like. What I found interesting is that Damon has been quoted as saying this is his heaviest release to date, but it isn’t very heavy at all. It seems to be your typical AOR/melodic fare.

Everything is well-executed on Rebel Within, and at the same time it is safe and predictable. Jesse Damon himself has a fairly smooth voice with a hint of southern rock attitude and the music is the same sort of AOR played by bands such as Unruly Child and Phil Naro. If you like your melodic rock on the mellow side with big harmonies, keyboards and each musical note being placed with pin-point accuracy you will likely enjoy Rebel Within. Personally I like my music dirtier and with more attitude.

So it’s really no surprise that my favorite songs here are the ones that rock the hardest, tunes like “Cry Out Loud” and “Pretty Girl”. I also like “Lethal Rebel” which starts off like a heartfelt Bon Jovi ballad and builds itself up to a powerful chorus. The best of the entire bunch though is “Hell Hole To Heaven”, the heaviest song on the album. It is driven by a drum pattern that sounds like a freight train rolling down the tracks and Jesse occasionally uses a deeper delivery that works well for him. If there were more songs like this one I would be very impressed.

AOR fans will love this CD, sleaze fans may find it too soft and seeing as I’ve never heard Jesse Damon until now I have no idea what his established fan base will think. I’d like to hear Jesse rock hard on his next release, he has the perfect voice for some bluesy guitar rock – time will tell.