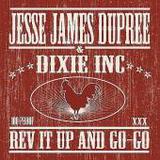 Review:
As a HUGE Jackyl fan since their 1992 debut, the minute anything is released by the band or vocalist Jesse James Dupree I head out and grab it. When I heard Jesse was gearing up for the release of this album I contacted his Entertainment Company in hopes of landing an interview, not only did I land the interview but they hooked me up with a copy of the record (I went ahead and kept my order in with BestBuy). Jesse previously released a solo album, Foot Fetish, in 2000 that left many Jackyl fans scratching their heads. I personally love the album because it really showed another side to the singer and wasn’t just another Jackyl album with his name on it.

Rev It Up And Go-Go will please Jackyl purists for the ‘Saturday Night’ side of the album but I have a feeling that the ‘Sunday Morning’ side might throw them for a loop – but it shouldn’t if they’ve bought any Jackyl albums since the debut. The ‘Saturday Night’ side is pure ‘100 Proof Rock n’ Roll’ that we’ve become accustomed to with Jesse, but ‘Sunday Morning’ is like a demented country radio program, something only he could pull off with the help of those on this album. Fans who dug “Secret Of The Bottle”, “God Strike Me Dead” or the intro piece to “Heaven Don’t Want Me (And Hell’s Afraid I’ll Take Over)” will no doubt love the ‘Sunday Morning’ portion of this album.

While some may be leery of how an album that goes from blistering riff-laden southern rock into an old time country radio show can be a cohesive and enjoyable experience, don’t! This is by far some of Jesse‘s best work ever. Complete with the interludes/commercials, it never lets down and you will find yourself singing any of the tracks of the album when you least expect it.

The album kicks off with the title track, a balls-out rocker about road trippin’ with the stereo crankin’ out your favorite tunes from the likes of Lynyrd Skynyrd, Kiss and Hank Jr., all of whom Jesse name drops in the song. “Bite” features one of the baddest riffs I’ve heard in a while courtesy of Blackberry Smoke‘s Charlie Starr, another good timing rocker about living life to the fullest. “Drop Dead Ready” is a groove-laden, head bobbin’, toe tappin’ rocker full of lusting lyrics for the opposite sex. “Tank” starts of with some sweet country dobro pickin’ courtesy of Mr. Starr (who comes from a rich bluegrass heritage and has released a three song EP of bluegrass classics that is available at www.blackberrysmoke.com), then explodes into a full on rocker that is no doubt written for our troops. I can envision this tune cranked to 11 while bombing the hell out of our enemies overseas! Dare I say this tune could be the PT. II of the Jackyl song “Open Invitation” that was available as a download in the weeks following the tragedy of 9/11? “Wash Me Away” starts out slow and quickly builds into yet another blistering riff-laden rocker. Five songs into this monster and you are sure to be head-bangin when Jesse makes a left turn on “1095”, a heartfelt (dare I say) ballad about life and love out there on the road – the chorus kicks into high gear then settles down going back into the verses, I believe this track could be a hit at radio. “Money Lovin’ And Speed” is a tribute to the late motorcycle enthusiast Indian Larry, a song complete with lyrics about bikes, women, money and leaving your mark on the world while living life to its fullest (a reoccurring theme on this album) and featuring some sweet slide guitar during the solo. Indian Larry has to be smiling about this blistering tribute from his friend. The final cut on the ‘Saturday Night’ side is entitled “Get To Me”. The multi-layered chorus vocals add a nice
touch to this tune.

‘Sunday Morning’ was recorded over Thanksgiving weekend (as was the entire album) in 2007 on Jesse‘s property in Georgia, the last half being recorded live in his home saloon which adds an authentic flavor to the country/bluegrass feel of the tunes. I won’t break down each track as some are interludes dressed up as commercials you would hear on an ‘old-time radio show’. Don’t skip over the ‘interludes’ or you may miss something, they really tie the album together. This half of the album features Richard and Fred Young from The Kentucky Headhunters. I suggest you grab yourself a six-pack of your favorite beverage and sit back and enjoy this part of the album. Not only does it feature some great tunes that lean to the country/bluegrass side but it is chock full of Jesse‘s sense of humor. “The Party” is an appropriate invite into this party and “Reality Star” takes a jab at the reality TV craze. “Well Enough” drips of old Waylon Jennings, a don’t step on my toes unless you want busted in the mouth message that reeks of attitude, which everyone knows Jesse is all about. “Had To Get Stoned” is an up-tempo track in the vein of David Allen Coe that has Dupree confessing his sins while out and about, all laid over some soulful lap-steel. “Far Out” has a swampy groove that smells of influence from John Fogerty‘s Blue Moon Swamp album as the lyrics have Jesse proclaiming his lust for life and living on eleven.

Any fans of Jackyl will love this record, but most importantly anyone wanting to forget about things for a while will definitely have this album cranked up, either at home or in the car. Rev It Up And Go-Go can really appeal to anyone if given the chance.