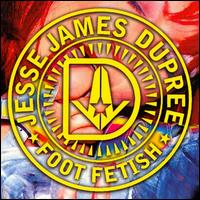 Review:
The solo outing from Jackyl front man Jesse James Dupree offers up more of the hard rock that Jackyl was known for. Songs like “Mainline” (which was a minor radio hit), “Devil’s Advocate” and “I Gotcha” really jam while “I Don’t Share Your Pain” slows it down a touch. He also does his own version of the aggressive “Let’s Don’t Go There”, which appeared on Jackyl‘s Cut The Crap.

The sound here is very similar to Jackyl, but with experiments with blues, R&B and funk thrown in. I had the pleasure of meeting Jesse James Dupree about ten years ago and he was very nice to all the fans. I was very impressed with Foot Fetish and therefore give it two thumbs up!