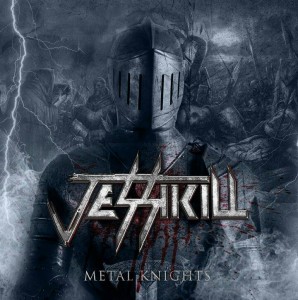 Review:
One release that had me more and more intrigued over the last few months has been Jessikill‘s “debut” EP Metal Knights. I first found out about singer Jessica Marie Espinosa aka Jessikill back in February 2014 when she was announced as the new lead vocalist for the Chicago, USA based heavy metal group Hessler. I was blown away by Jessikill‘s voice as soon as I heard Hessler‘s first single “Never Lost My Way” and Hessler‘s Ghost Dance EP ended up as the number three album on Sleaze Roxx’s Top Ten Albums of 2014. Jessikill‘s voice was also amazing live as I witnessed myself while she fronted Hessler. Unfortunately, Hessler with singer Jessikill at the helm did not last with the diminutive but powerful singer finding romance with now current Jessikill lead guitarist/keyboardist Jyro Alejo (who is apparently based in her hometown of San Antonio, Texas, USA) and eventually choosing to continue only with the band bearing her name.

With Hessler continuing to lay low while working on new material, I was hoping that Jessikill would be able to fill the void left by the rather quiet of late Hess Express. If you ever wondered what Yngwie J. Malmsteen would sound like in a Dio or Iron Maiden sounding band with one of the best female singers around, Jessikill may well provide that answer. Guitarist Jyro Alejo is a master guitar shredder who can definitely cram in many notes a la Yngwie while playing ultra fast. There is no denying this guy can shred like almost nobody else but does his playing fit with the classic heavy metal sound that Jessikill offers? The answer is yes and no. Sometimes, Alejo‘s guitar shredding works quite well while other times, it borders on overkill or seems to awkwardly fit the songs. There are lot of influences that can be spotted on Metal Knights from the Iron Maiden like guitar melodies especially after the chorus on “The Beast” to Hessler on “Metal Knights” with the gang vocals and general feel of the song to Dio on the slower paced tracks. The former is no surprise since Alejo also plays in an Iron Maiden tribute band called Seventh Son.

Metal Knights opens with a classic building intro titled “March Of The Night” that many ’80s heavy metal bands used to adopt such as Iron Maiden with “Ides Of March” on Killers. “Midnight Rush” starts off with almost thrash like guitar riffs before singer Jessikill takes control of the song with her powerful voice and slows it down and speeds it up seemingly at will. Alejo‘s guitar shredding on “Midnight Rush” is actually kept to a minimum and his solo fits nicely with the overall song feel. Next up is hands down the best song on the EP which is the title track “Metal Knights.” I had previously thought that Jessikill had released at least another EP in the past and I did find a self-titled four-song EP (which I purchased immediately) that was apparently released back in February 2014. Interestingly enough, that four-song EP contained the song “Metal Knights” which Amazon sample sounds very close to what is offered on the Metal Knights EP except that Alejo‘s guitar shredding was presumably not on the original version. Whatever the case, “Metal Knights” sounds amazing on Jessikill‘s latter EP and has to be considered the band’s signature song similar to “Never Lost My Way” is for Hessler.

From then on, the songs slow down quite a bit on Metal Knights with mixed results. “The Beast” starts off with a heavy keyboard intro before some Dio like paced vocals and melodies before switching gears into the Iron Maiden like guitar melodies. Alejo‘s guitar shredding/solo on “The Beast” is played at a hundred miles a minute and although quite enjoyable does not seem to fit the song itself. At the end of the day, I enjoy “The Beast” even though the guitar solo/shredding is a bit over the top. One disappointing track is “Give It All” which I suppose was meant to be the epic ballad on the album. Although Jessikill‘s vocals are impressive and Alejo‘s guitar playing is tastefully incorporated into the song, “Give It All” seems to fall rather short of the epic feel that I think the group tried to attain. The Metal Knights EP closes off with “Don’t Let Go” which at the start reminds me a bit of what Hessler sounded like with Jessikill singing minus Alejo‘s distinctive guitar solos which sound damn good on this song.

Overall, Metal Knights is an enjoyable EP although it sometimes feels that the band has not quite conquered how to balance and integrate Alejo‘s guitar shredding wizardry into the classic heavy metal songs that the group has to offer. I feel the best is yet to come for Jessikill. If you’re interested in purchasing the Metal Knights EP, the best spot appears to be via the group’s website.