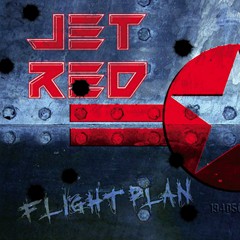 Review:
A few of you may remember Jet Red, a California pop-rock band that released one self-titled album back in 1989 on Relativity Records. What many may not know is that Jet Red recorded a second album back in the day that was shelved when the grunge tide kicked hair-metal to the curb. With a renewed interest in the teased-haired bands from the ’80s that second album has finally been given a proper release.

Flight Plan picks up where the 1989 debut left off, mixing hard rockers with syrupy melodic numbers for a relatively safe yet entertaining listen. The problem with Jet Red‘s debut was a slick production and the fact that the keyboards often took over the songs resulting in a watered down AOR sound. That dilemma still rears its ugly head on Flight Plan, but isn’t as pronounced. This long lost recording better captures the energy of the band’s live shows and displays a slightly heavier and more authentic sound.

The proof comes right off the bat with “Drive In”, a song that is arguably Jet Red‘s shining moment — it contains some crunchy guitar work and strolls along like a Krokus track, only infused with far more melody. “After The War” keeps the heavy sound with pop-overtones coming and vocalist Willie Hines really shines on it. The next few tracks find the keyboard influence growing once again as Jet Red drifts into Saraya territory. Occasionally that type of sound works well for the band however as songs like “See The Light” and “I Surrender” really capture the pop-rock sound of the ’80s. Other times, like the stuttering funk infused “Take It To Heart” and the odd “Tell Me When You’re Ready” find the band losing their identity.

Closing out Flight Plan are three tracks from Jet Red‘s early history featuring Marty Friedman before he made a name for himself in Megadeth. The raw recordings and shredding add a heavier touch to Jet Red, but aren’t necessarily their best songs — although “Lonely” and “Let It Roll” (both of which ended up on the debut) come damn close. Also included is a live DVD from late 1990 that captures Jet Red at their best. This fan filmed live show proves that Jet Red was always heavier onstage than they were on album leaving one to wonder why they couldn’t capture this type of sound in the studio.

Jet Red isn’t going to impress you with originality, but their brand of hard rock with pop and AOR overtones may at times. While Flight Plan is often too slick for my liking, this is the type of music that sold millions of copies in the late ’80s.