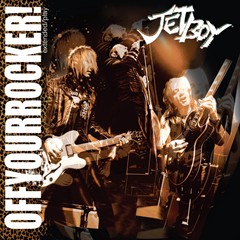 JETBOY
OFF YOUR ROCKER
Released on March 2, 2010 (Rumble Records)

Review:
The spiked hair has return… only dyed a different color now! When Jetboy first debuted on a major scale back in 1988, with vocalist Mickey Finn‘s image making the band stand out from their hair-sprayed cohorts, my biggest complaint with them was over-production. At the time it seemed like the person twisting the knobs in the production room was sucking the life right out of the music. Now that Jetboy is now longer being controlled by a major label they can do things their own way, and give their songs the punch they always deserved.

Off Your Rocker represents the way Jetboy should have sounded since day one. There is no studio trickery, instead the band sat down together and kicked the three studio tracks represented on this EP out in record time. This approach has given Jetboy a more honest sound — the production is still tight, yet doesn’t completely strip the rawness of the band from the recordings. Not only that, but the three new songs are some of Jetboy‘s best work. “Perfectly Wrong” shuffles along like classic Aerosmith, “Going Down (Above The Clouds)” delivers straight-up hard rock with a heavy beat and steady rhythm while the best song here, “Dogs Gotta Roam”, is a great slab of ’80s hair metal. The three live tracks sound great, but don’t differ much from previous versions that have been made available through the years. All in all Off Your Rocker is short and sweet, delivering exactly what a Jetboy fan wants to hear from them.

Jetboy seem to have recaptured their creative spark and here’s hoping this gives the band the kick in the ass they need to record a full-length album. If they are able to make an entire CD that sounds as good as the first three songs on this EP we will all be in for a treat! Hopefully the departure of the rhythm section doesn’t set the band back, but with original members Finn, Fernie Rod and Billy Rowe still plugging along everything should be fine in Jetboy land.