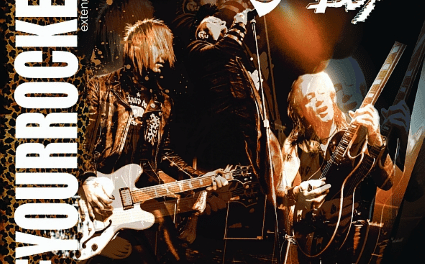 JETBOY
OFF YOUR ROCKER! – EUROPEAN EDITION
Released on September 30, 2016 (City Of Light Records)

Review:
Granted, Sleaze Roxx has already reviewed this album more than six years ago but Jetboy‘s Off Your Rocker! is now repackaged if you will as an European Edition, which includes an additional bonus track called “Stolen People.” The good news is that I really don’t remember much about Sleaze Roxx‘s now former editor Skid‘s review of Off Your Rocker! six years ago. So you really are getting a fresh review for an album that for all intents and purposes was really released six and a half years ago and for the most part already reviewed by Sleaze Roxx.

Although I am not a fan of a band re-releasing an album and simply adding one bonus track, since I never heard Off Your Rocker! when it first came out in 2010, it is really like a new release this time out for me. I am not sure what prompted Jetboy to re-release their six-song EP from six years ago and “tweak” it by adding an extra studio song. In any case, Off Your Rocker! – European Edition rocks from start to finish so if it means that more people will discover this great EP six years later, then re-releasing it is a great idea!

The first three tracks on Off Your Rocker! – European Edition consisting of the cool grooved “Perfectly Wrong”, the Bruce Springsteen or John Cougar Mellencamp tinged “Going Down (From Above The Clouds)” and the gritty “Dogs Gotta Roam” are all enjoyable rockers that will likely please most sleaze rock fans. There’s nothing complicated about the songs but then again, great songs don’t have to be complicated. Each track has a great groove and some raspy vocals from lead vocalist Mickey Finn. The three live tracks are also enjoyable rockers in the same vein as the first three songs on the album — simple yet effective groove laden tracks highlighted by Finn‘s raspy vocals.

I confess never having been that into Jetboy in the past so I checked from which studio albums that the three live tracks on Off Your Rocker! – European Edition emanated from. In the process, I noticed that the additional bonus track “Stolen People” on Off Your Rocker! – European Edition was already featured on a past album — 1999’s Make Some More Noise. Accordingly, even though the track “Stolen People” is a good one, it’s disappointing to see that Jetboy had already released the song over 15 years ago.

JetBoy‘s Off Your Rocker promo video from 2010: