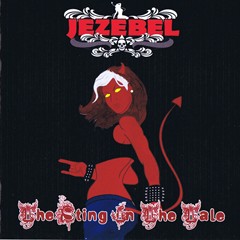 JEZEBEL
THE STING IN THE TAIL
Released 2011 (Jezebel)

Review:
Jezebel are a band with an identity crisis, and it shows through on their second EP release The Sting In The Tail. The group claim to be hard rock, with influences ranging from glam to sleaze and with a heavy dose of NWOBHM. Due to this mish-mash of ideas The Sting In The Tail could have been more appropriately called ‘a pain in the ass’.

“All Night” starts things off on the right foot — sure the vocals are thin and grating (especially on the chorus), but Jezebel also show off during the guitar solo and display a convincing amount of attitude. Singer Jay Lei really starts to annoy on the second track “Psycho” while the drummer appears to sleep walk through the song — it is a number that is best forgotten. “Running Free” makes promises of being a rock ballad with a nice twist at the end, instead in plods along at a sleep-inducing pace before morphing into the galloping bass sound of Iron Maiden. Wrapping up this four-song EP is “Sting In The Tail”, a song that takes me back to the times I got drunk in a bar and had to scream over the maddening sounds of the bar-band to talk to my friends.

I hate being mean, but Jezebel has to decide where they want to fit within the rock and roll world and stop trying to appeal to a broad group of fans. As it is I’m not so sure this UK outfit is even capable of excelling at one genre, as nothing contained within The Sting In The Tail gives me any optimism. Sounds like this were excusable during the NWOBHM when metal music was finding its footing, but in this day and age it is unacceptable. In an odd twist, a song from their first EP called “Burn The Witch” kicks the shit out of anything on this release — which makes me wonder, is Jezebel heading in the wrong direction?