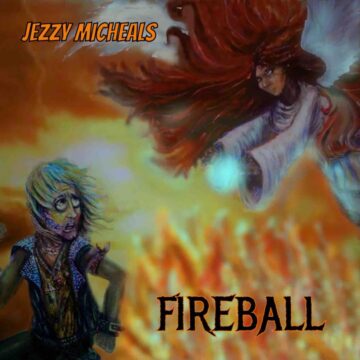 Review:
Texan rocker Jezzy Micheals is back with a new solo album titled Fireball. Not much has changed from Micheals’ previous solo album Spell Caster. Micheals still handles all of the vocals along with all of the guitar and bass duties on the album except for one guitar solo on one of the weakest tracks (“Dime Store Hood”) on the record. Whomever is handling the drums on the album aside from the track “Dime Store Hood” remains a mystery.

In fact, it appears that there has been little progression from Micheals‘ previous album Spell Caster. Micheals still talks his way rather than sings quite a bit throughout his “vocals” on Fireball. The music still seems to have a retro classic early KISS feel to it. Unfortunately, this similarity comes up way too close on the opening track “Deadly Passion” where one of the opening guitar riffs sounded so familiar that I was able to hum the KISS song in my head until I got to the chorus part to figure out what song it was. Any music fan familiar with the first three KISS studio albums should be able to pick out the guitar riff for “Got To Choose.” This is a rather disappointing start to Micheals‘ album Fireball whether or not the Texan rocker ripped off that guitar riff on purpose or not.

One thing about those first three KISS albums (KISS, Hotter Than Hell and Dressed To Kill) — at least for me — is that I hardly listen to them. While there is no question that there are some great songs on the album, I discovered KISS‘ earlier material through Alive! so it’s just not as compelling to hear KISS play their studio versions of those tracks at seemingly half the speed and without that live feel. Nevertheless, I have grown to like those first three KISS albums simply on the basis of being so familiar with those tracks. That cannot be said for Micheals‘ songs on Fireball. They have that slower plodding feel of those first three KISS albums. There is a reason that KISS didn’t breakthrough until Alive! was released. The real power and energy of those classic KISS songs that many of us know and love came through on Alive! but was simply not conveyed on those early studio albums. Had it not been for Alive!, I doubt that I would have been able to really get into those first three KISS studio albums. And that’s the same problem that plagues Fireball.

Unfortunately, the songs on Fireball sound for the most part amateurish. Although perhaps they have the potential to be great just like those early KISS songs when and if they got their live makeover, at the moment, it simply is hard to get through a full listen of the Fireball album. I will give a two thumbs up to Micheals for recreating that old ’70s era sound though. He certainly has captured that sound but that’s not what I want to hear in 2021. The best tracks on Fireball are the ones where Micheals is singing the most such as “Only A Moment.” Tracks that fall short are when Micheals has elected to talk his way through his vocals such as “Dime Store Hood.” Just like on Spell Caster, my recommendation is that Micheals find himself a more accomplished singer that can take over the vocal duties for him.