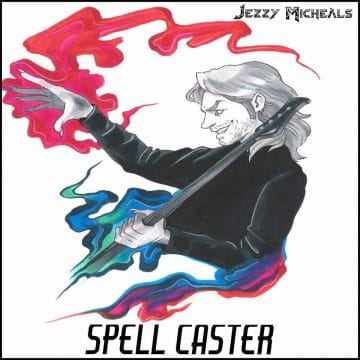 Review:
With technology simply getting better and better every given year, it is no surprise to see a release such as Jezzy Micheals‘ Spell Caster album. It is simply pretty much a “do it yourself” album from start to finish from Jezzy Micheals. Not only is Micheals responsible for writing and arranging all nine songs on Spell Caster, he handles the singing, guitars, bass and drum arrangement. By the way, “drum arrangement” — what exactly does that mean? Is Micheals using a drum machine throughout his album?

The good news about handling all instruments with the exception of two cameo guest spots on two songs is that you don’t need anyone else to complete your album. The bad news is that unless you’re ultra talented, there will be some areas where you will fall short. For Micheals, his weakness and on the album happens to be his singing, or shall I say his talking throughout the various tracks on Spell Caster. Micheals‘ “singing” reminds me of Ace Frehley‘s vocal delivery without the Space Ace‘s charm. Micheals‘ vocal delivery simply ruins most of the songs. Now, I would say that I am not that picky when it comes to singing. There are certainly some lead vocalists out there such as the late great Bon Scott or even Van Halen‘s David Lee Roth whose vocal deliveries were somewhat limited — and in the case of Roth, still limited and getting worse — but each had a certain charm to their respective vocals and were still way better than what Micheals provides in terms of his “singing.”

I wish that Micheals would have known his limitations and recruited some real singers the way that Canadian guitarist Sam Tamberelli did for his Armageddon Roxx project where he found good and “affordable” singers from Denmark (Chris Catton) and Brazil (Raphael Gazal) to sing on his debut album. Micheals‘ “singing” unfortunately gives an amateur feel to Spell Caster. That is a shame because if you take Micheals‘ vocals out of the songs or simply try to ignore them, the melodies and especially guitar riffs upon which most of the songs are constructed are pretty good! The music has a retro feel to it — kind of a ’70s classic rock meets early KISS feel to it. For instance, a song such as “Won’t Ya Stop Talkin’ (Catchin’ Flies)” starts off quite strongly and with plenty of promise before Micheals starts talking/singing. Every song on Spell Caster has potential to be decent to good but Micheals‘ singing drags each song on a downhill slope.

If anything, I would really like to hear the songs on Spell Caster with a more accomplished singer. I think that the songs would then have a better chance to shine and be appreciated.