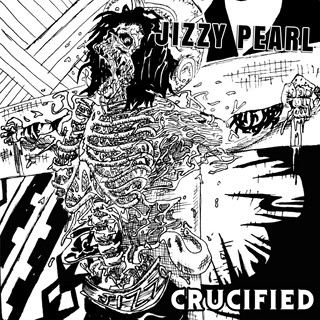 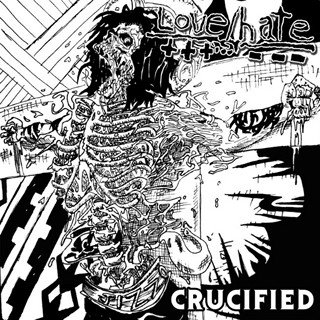 Review:
Not since corporate bigwigs intimidated Green Jelly and D-A-D can I recall an album having to be renamed at the very last minute. Originally slated as a Love/Hate album, Crucified was released as such but quickly pulled and retooled as a Jizzy Pearl solo effort after former bandmate Jon E. Love threatened a lawsuit. Let’s be honest though, in this day and age does the Love/Hate moniker really have much pull? Probably not, which is why Pearl didn’t hesitate to attach his own name to Crucified.

The EP’s title was obviously born out of Pearl‘s 1992 publicity stunt in which he crucified himself on the infamous Hollywood sign, and the opening track even pays homage to the event. “Hanging You Out To Dry” is one of the heaviest tracks on this six song EP — played with punk rock abandon the song quickly goes for the throat. From there however Crucified takes a melancholy turn, beginning with “Sunny Day” and slowing down with each following track. “You’re Making Me Nervous” is the type of song that grows on you like an invasive weed, “I Don’t Want To be Your Baby” is the album’s ballad and gets the job done, “Love Is All” experiments with Middle Eastern and Indian sounds, and the closing “Too Late” wades knee deep into the blues. It’s probably best that Crucified is officially a Jizzy Pearl release, because it has more in common with his solo efforts than Love/Hate‘s best remembered moments.

Much like Love/Hate‘s sporadic post-Wasted In America releases, Crucified is completely hit or miss but the type of release that pushes boundaries and gets better with each listen. Jizzy Pearl and his old bandmates were never the most accessible group from the ’80s glam invasion, but they did leave us with several underrated gems over the course of their career. The same could be said for Crucified, an EP is which Pearl sounds as cantankerous and in-your-face as ever, but doesn’t really stand up next to classics such as “Blackout In The Red Room”, “Wasted In America” or even “Don’t Fuck With Me”. I guess it doesn’t really matter, with the recent announcement that Pearl has joined forces with Quiet Riot this release is likely dead in the water.