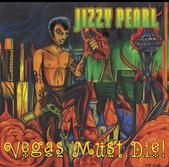 Review:
I’m a big Jizzy Pearl fan. His work is always so underrated and I just don’t understand why. Love/Hate was a great band and his work with L.A. Guns was pretty solid as well. His recent run with Steven Adler‘s GNR band was good as is his current work with Ratt, but Ratt needs to release a new record otherwise they may as well be considered a cover band. But Jizzy solo is a very different animal.

Someone walked by my den while I was playing Vegas Must Die and working on some projects. They said, “This doesn’t sound quite like your usual music.” The truth is, it isn’t quite hair metal the way hair metal is accepted by the public. It’s a bit too raw to be considered what Jizzy is known best for.

The production on Vegas Must Die is its biggest determent. The band just doesn’t sound as crisp as they should on an album released in 2005. It’s clear that all the songs are quite well written and some of the lyrics are very deep and still catchy but some of the luster is lost based on the production.

Reading this so far, you all might get the impression that I don’t like this album. Nothing could be further from the truth! I actually enjoy quite a few songs off the record. I suppose I just am a bit disappointed with the production quality which, while not bad, isn’t as clean as it should be.

There are positives to report. For one, almost all the songs are quite well written and have fantastic lyrics with incredible guitar solos. For some songs, the guitar solo truly brings out the life of the song and pulls you in which is what a good guitar solo is supposed to do.

If you’re going to buy MP3 samplers or want to know what songs I like best, I’d say to check out “Hit And Miss”, “Look At You Now”, “Long Time”, “Good Girl”, and my personal favorite track “How’d I Get So Lonely”.

“Look At You Now” reminds me of Guns N’ Roses quite a bit whereas “Hit And Miss” is just a flat out rocker. “Long Time” is way out there but cool as hell and “Good Girl” is an example of a solo pulling you in…without the solo, I’d probably not like the song as much as I do. But, loving “How’d I Get So Lonely” might show my age. After all, I’m getting older. I’m almost 24!

“How’d I Get So Lonely” is a softer song with fantastic lyrics and the best vocal performance by Jizzy on the record. It’s soft, sweet, and radio friendly. It shall make air on my show!

Overall, it’s a solid release. I’m not going to say its groundbreaking but I didn’t expect it to be. Jizzy‘s a great singer and song writer. If you love his voice, you should pick this up.

Review:
Whether you love him or hate him (there is rarely any middle ground when it comes to Jizzy Pearl), hard rock’s resident whore is back with his third solo album Vegas Must Die! After slugging it out with Love/Hate, L.A. Guns, Ratt and Adler’s Appetite, Pearl locked himself away in Las Vegas where he wrote this album in a mere three weeks. The liner notes claim, “Vegas, you’re a sleazy little town but not quite sleazy enough”. Hell, if a town named Sin City isn’t sleazy enough for Jizzy Pearl bookies will make it even money that Vegas Must Die! will fit this website like a glove.

With the help of former Salty Dog guitarist Pete Reveen (where the hell has he been hiding?), Jizzy created the exact type of CD he is noted for – sleazy, in your face and taking a detour off the normal beaten path. Despite the title and emotional delivery, this release isn’t as dreary as his L.A. Guns venture, yet would have made a great album for those rock outlaws. I’m amazed at how much Jizzy sounds like unheralded Canadian Sass Jordan on the incredible mid-tempo “How’d I Get So Lonely”. This tune should be a staple on rock radio playlists, but sadly conservatives have all but killed that format.

This CD is filled with sensational music, such as hyper-driven scream fest “Hit And Miss”, the unwavering “Only Wait So Long” and the catchy “Long Time” which incorporates current trends with Jizzy‘s roots. “You Don’t Own Me” is an oddball ballad that could be the musical cousin of an old Love/Hate number called “Don’t Fuck With Me”. “Little Dancer” first appeared on the Adler’s Appetite EP and still sounds great half a year later, and the CD ends on a cool retro note with “Good Girl” – complete with “woh oh” backing vocals.

For some people Jizzy Pearl‘s grating vocals may be too much to take in at once, but I’ve always loved his rawness and existing fans should view this as his best release since Love/Hate‘s heyday. This comes across as a very heartfelt and personal CD, and more often then not times of despair make for great music. The official website www.jizzypearl.com seems to be slow in updating, but www.shrapnelrecords.com has more information. 2005 is turning into an excellent year for new music!