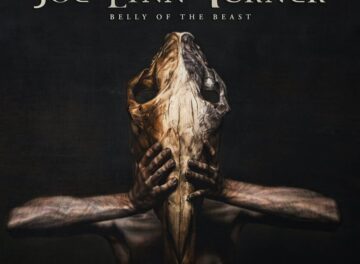 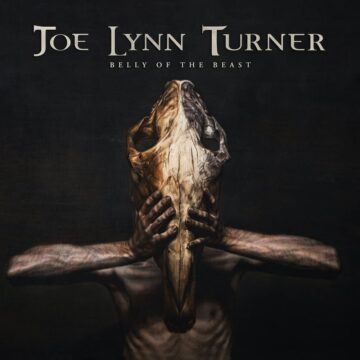 Review:
As a public service announcement, I would like to state that my political opinions — the political opinions of James Walsh who wrote this review — may not represent the views of Sleaze Roxx or its contributors. They are my opinions alone. While I beat around the bush about political views in other reviews, I don’t think there is any choice but to let a few slip out when reviewing the new Joe Lynn Turner record because it is entirely about the current geo-political climate. So, keep that in mind! And now, back to your regularly scheduled review!

Boy, the output from New Jersey rock and rollers in the month of October 2022 has been epic from Tom’s River, New Jersey’s own Skid Row‘s dynamic new album The Gang’s All Here, which brings back the band’s classic sound to this album to the record at hand here today. Hackensack, New Jersey’s own Joe Lynn Turner returns with an album far and away heavier than anything he’s done before… Man, New Jersey hasn’t rocked like this since Trixter were giving it to you good and… Did that joke land? I hope so!

It has been a long time since Joe Lynn Turner has put anything out. After a string of solo albums in the 2000’s that were absolutely epic — The Usual Suspects in 2005 and then Second Hand Life in 2007 — which were two albums I still consider among JLT‘s absolute best work. From the great Akira Kajiyama and JLT‘s Fire Without Flame record to his later work with Rated X and Sunstorm, JLT had a hot period there of releasing high quality, highly produced rock and roll that ranged from bluesy hard rock to pop metal which may one day be looked back upon as being truly amazing albums but maybe weren’t given the respect they deserved at the time… Seriously, check out The Usual Suspects! Karl Kochran, who has since had a stroke which has taken his ability to play away from him, delivered some of the most inspired guitar work of all the amazing players JLT has worked with over the years which includes, but is not limited to, Yngwie Malmsteen and Richie Blackmore. I mean, Joe‘s voice was on fire and Karl was matching him with hooks that will blow your mind. But, that was then, this is now. What does Joe Lynn Turner sound like in 2022?

Well, aside from losing the Tony Danza from Taxi hair piece that he wore for 40 something years and exposing his bald head — a shocking change of looks I must admit — JLT is still JLT! His strengths are in the melody. He can sing the phone book and make it a rock and roll song you’d hum in the shower the next morning. He is truly gifted in that respect. But, the approach here is far different. While JLT sounds the same as ever, vocally strong with range and the ability to sell the songs in a different pitch, tempo, and style, the backing music is different than you might expect. Imagine if Joe Lynn Turner walked in and said, “Hey, let’s jam to Helloween!” That would be what you get here. It has a far more power metal, borderline Euro metal, style than anything he’s ever done before. Does it suit him? Well, it doesn’t not suit him. Is that an answer? Well, it isn’t not an answer! Sorry, I’m having fun with you. The answer is, it does suit him. But, it might turn off some fans hoping for the more classic rock sound you heard on his work with Rainbow, Deep Purple, or even up to The Usual Suspects. But, if you wanted to hear the natural progression from the Sunstorm albums, this might be more in that ballpark.

“Belly of The Beast” is the first track and it reveals two things about the album — it is heavier than a sumo wrestler after an all-you-can-eat buffet and it is going to remark about politics and current social issues. I mean, how can anyone look at the world today, as an artist, and not write about what they see even if they’re writing from a different perspective? If ever there was a time in history that would provide a muse for creative thinkers, now is it. Who knew it would take our near destruction as a culture to bring out such creativity? Anyway, JLT sings, “You have lost your from, you may lose your life. Time for you to make a stand or die under the knife. Violence and defiance demanding your compliance. Just do as you are told. Take the vaccination and kill the population. The Devil takes his toll!” WOW! With all the political songs you happily sing along to from the beginning of time, seemingly, that you may not even have known had a political message… This one wraps it up in a newspaper, rolls it up, and smacks you upside the head! The vaccination? Well, that speaks for itself. I don’t think I’ve ever felt like I could have a beer with JLT more than after that string of lyrics. We’re of like mind.

“Black Sun” is a little less heavy both in political messaging and in sound. If you like the grooving, swinging, more bluesy JLT, this is more in line with that… Still a heavier backing band than ever before. But, much more in line with what you’d expect from JLT. “Tortured Soul” is probably the most epic of the songs on this album. When I was a teenager, I was really getting into hard rock and heavy metal. I started buying KISS, Mötley Crüe, and Skid Row records amongst others. My best friend got really into prog rock like Rush and Yes. As I delved further into the now classic hard rock and found Rainbow, my friend got into power metal that had a far too dweeby Dungeons and Dragons vibe to it. It just felt disconnected from human emotion and instead was about random things like wars that either did happen centuries ago or fictitious wars gas lighting the apocalypse. He really, really delved into that stuff and I must admit I just really can’t get into it at all.

“Tortured Soul” reminds me of him falling out with my friend over music because it has that overbearing backing vocal that really sounds like something that ought to be on a Blind Guardian or Gamma Ray album and not a Joe Lynn Turner one. So, while the songwriting is strong, I would’ve been less turned off to it if the backing vocals weren’t quite so in the realm of stuff I just don’t like. As Randy Jackson would say, “A little pitchy for me, Dog.”

After bashing the previous song, which is one of the most promoted songs on the album, we reach my favorite song on the album. “Rise Up” goes back to the geo political side of the record in a more direct way. Be it a spiritual rise or an uprising among the pissed off and silenced masses that have gone along to get along for far too long helping to create this mess the world, — especially the United States — is in, the message to “Rise Up” hits a home run. From a soft piano intro setting the groove to heavy guitars and JLT going for it vocally, this one cooks, Daddy-O!

“Dark Night of The Soul” is the softest song on the album and much like “Black Sun”, is a lot closer to what you’d expect, perhaps want, from a JLT record. “Speak the truth when the truth must be told” is a haunting lyric. I love it! “Tears of Blood” has a like vibe to “Rise Up”. A grooving, heavy as hell for JLT backing with very cool guitar work mixed with more vague lyrics that aren’t quite as blunt as in other songs. The backing vocals are kept to a minimum here which I like as the backing vocals, the gang vocals, are just so deep and almost like a choir of monks or something. JLT‘s voice can carry it on his own and does. The chorus to “Desire” might be my favorite of the entire album. With a grooving, almost swinging guitar riff that vibes like “Black Sun”, this one really connects the dots with the backing vocals and Joe‘s voice. It almost has a very heavy vibe like The Cult on steroids. Another singer of Rainbow was the late Ronnie James Dio. I think some assume Ronnie and JLT had a problem because of this fact but if that ever was the case, “Don’t Fear The Dark” should show that JLT has an appreciation for Dio! This one is a bad ass metal song and as a fan of both JLT and Dio, it brings a smile to my face. Great, great stuff!

“Fallen World” is a much more power metal vibe song and really is quite heavy but leans a lot on those backing vocals that I’ve expressed my displeasure with. So, “A little pitchy for me, Dog!” “Living The Dream” is up next and is about JLT‘s life well lived and perhaps a little ironic look at how fortune and fame isn’t what it is all cracked up to be. The song is strong… It’s certainly more in the JLT solo album vibe. The final track is “Requiem”. I am not a huge fan of the song, to be honest, but it does paint a picture for me. You know when you’re at church and you’ve done the blessings, the “Peace Be With You” and the Body of Christ sacrament? Well, that last song as you get prepared to leave comes to mind here. That is not to compare the record to a mass. Just that it kind of fits as the last song on the album. And, yes, it leans too much on the backing vocals.

All in all, JLT is back to making music and that is the most important thing. The output is really strong even if it is a different style than I would expect, maybe even like, from the veteran fellow Jersey boy. It leans in to the immensely popular — in Europe — power metal sound and leaves perhaps a little too much of JLT‘s classic rock sensibilities behind. Many are there! And, anything JLT sings on is going to have melodies that work. But, the backing vocals are the sore thumb here. They don’t fit as well as they should and really distract and detract from the finished product.. What is odd is JLT‘s solo albums from the 80’s such as Hurry Up & Wait, weren’t as huge of htis among the metal loving crowd because they were so commercial. And yet, this one could have stood to have a little  more commercial of a sound… Boy, I can’t be satisfied, can I?

With that being said, the songs that I do like I like a whole heck of a lot. And, the message is important. Everyone is distracted. Everyone allows things we know aren’t right to happen in front of our face, be it crimes or other wrong-doings, and we say and do nothing to stop it because of fear of being cancelled or labeled something unsavory. Thankfully I, and it seems JLT, have no fear of the unwashed masses and can stand up on our own two feet and challenge others to join us. What is at stake here with the geo-political climate the way it is? Everything. Every aspect of your life. So, stand up and fight. Because, sleepwalking through life, as many of us have since the start of the pandemic, has created the mess we’ll have to dig our way out of. It is a long climb to get out of the Belly of The Beast!