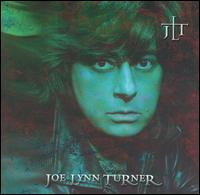 Review:
From the opening of the guitar/organ dueling on “In Cold Blood” I knew I was in for a treat. In fact I ended up playing that song to a buddy and asked him what he thought. He replied that it “sounded like 80s hard rock” — you bet your ass it does — flawless 80s hard rock, delivered by one of the genres often forgotten talents; Joe Lynn Turner. For those that may not have heard Turner‘s bluesy whiskey-soaked vocals before, imagine a cross between David Coverdale and Krokus‘ Marc Storace.

Few other songs on JLT feel as urgent as the opening cut, but if mid-tempo melodic rock is your thing you will enjoy this release. “In Cold Blood” harkens back to Turner‘s days with Deep Purple. “Love Don’t Live Here” is a ballad that led me to believe I had pressed play on an Allman Brothers album by mistake; it really shows how great Turner‘s vocal ability is. “Fantasize” is a hypnotizing number, with sing-a-long chorus and flawless guitar work. “Drivin’ With My Eyes Closed” returns the classic organ sound, and is one of the harder songs on JLT. “Hit The Switch” is the darkest tune on the album, with a sludgy Soundgarden type guitar sound.

With cameos by Al Pitrelli, Chris Caffery and Greg Smith, you know that the musicianship on JLT is top notch. If there is one complaint to be made with this album, it would be that Turner fails to deliver enough all-out rockers — and while mid-tempo material is good, over the top can be even better. All in all you can’t go wrong with JLT, it may not be original, but it delivers. More information can be found at joelynnturner.com.