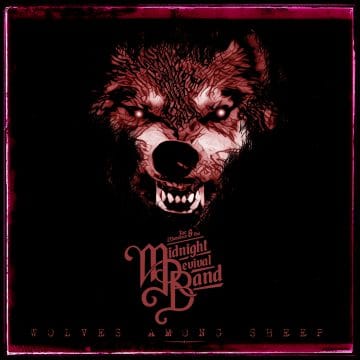 Review:
Joe Mansman and the Midnight Revival Band (JMMRB) is based in Glen Falls, New York, USA. This is a four song EP that expands on their previous release, Bastard. Joe Mansman talks about the new EP as “It’s not too evident, but if you do some diggin’ underneath the booze filled, cocaine fueled rockin you’ll find something unique lyrically.” Not sure about that, but I sure do love the booze filled and cocaine fueled rockin’ that the band produces.

Often with short four song EP releases, it is difficult to get a handle on a band’s direction. That’s not the case with Joe Mansman and the Midnight Revival Band. It is obvious that they are a blues based band rooted in sleaze and old school metal. I’m really high on this stuff. Opening track “Revels” is pretty powerful and quite well performed. That track was originally recorded as a single, but as a result of positive feedback, the band went forward with more recordings.

“Teeth And Eyes” is another hot shooter that I find interesting as it has a guitar sound that grinds perfectly with both the vocals and chorus. There is an organ buried in the second verse (I love an organ), but it kind of pops up out of nowhere. I hear it again during the solo but it is buried in the background. I’m thinking either use it or don’t… There’s a thing about “Blood / Grain / Cocaine.” It is a really fun tune. The solo is quite well done, and the transitions are seamless. This is a well written rock song. Finally, “Five Knives” starts with a bit of plodding but does explode with some fantastic rocking sounds during the chorus and beyond. Old school Sabbath combined with newer sounds like Monster Truck.

I have said before that it is always hard reviewing a band based on only four songs. I reached out to Joe Mansman about this. I asked why Joe and the band chose to issue a four song EP rather than a full album, given the strength of these four songs. Joe‘s response was, “It’ll happen eventually. We really love playing live. I think it’s where we truly thrive and getting new music out quickly helps us stay on the stage with little delay. The studio always ties us up in a way, and granted we’re like surgeons during recording, and are very particular with how we track, but we care more about getting out there in front of people and having a good time.”

These days, it seems that bands can find more financial success playing live than issuing new albums. Given that and this EP, I would love to see this band live in Ottawa (hint hint). Joe Mansman and the Midnight Revival Band are capturing a mix of American Biker and European Sleaze that should appeal to both sets of listeners. I really enjoyed this listen, and my chat with Joe. You can listen to Wolves Amongst Sheep via Joe Mansman and the Midnight Revival Band‘s Bandcamp.