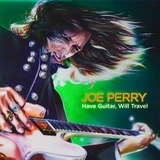 Review:
I don’t understand this at all. With all the recent turmoil within the Aerosmith camp it sounds as if one of the stumbling blocks is that guitarist Joe Perry wants to revert back to the band’s bluesy 70s sound while vocalist Steven Tyler is happy with the current direction the band have been taking. The thing is, Perry‘s new solo CD Have Guitar, Will Travel sounds absolutely nothing like Aerosmith‘s golden years, or even the early Joe Perry Project for that matter.

Have Guitar, Will Travel is a mish-mash of ideas that more often than not disappoints. Joe Perry does show off his guitar slinging skills, it’s just too bad the songs themselves fall so flat. Aside from the first single “We’ve Got A Long Way To Go”, “Freedom” and the moving “Do You Wonder”, which is the closest this disc sounds to Aerosmith, there really isn’t much here to brag about.

I think the biggest problem with this album is that Perry stretches himself too thin, exploring too many musical directions and styles, because of that the CD doesn’t flow very well. I suppose a solo release allows for this type of exploration, but like David Lee Roth‘s Your Filthy Little Mouth, sometimes ideas are best left as just that, ideas. As it is, I’m having difficulty even getting through this CD, not even Joe Perry‘s fretwork can save it. And after listening to “Somebody’s Gonna Get (Their Head Kicked In Tonite)” I know who I want to lay the boots to!

If Have Guitar, Will Travel is the direction Joe Perry wants to take Aerosmith it’s no wonder Steven Tyler is running for the hills. I don’t think it is though, this simply sounds like Perry and a group of friends fooling around in the studio…recordings that would have been better off forgotten about in that same studio. Excuse me now, I’m off to flush this mess out of my ears by spinning Let The Music Do The Talking.