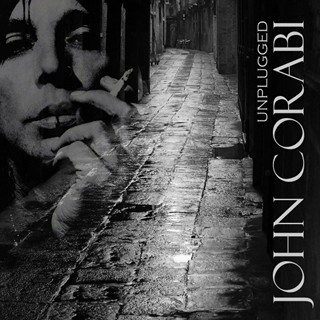 Review:
John Corabi‘s highly anticipated solo debut album has finally seen the light of day. The former The Scream, Motley Crue, and Union singer’s fans have been demanding an album from John Corabi for years. The new album, titled Unplugged, might not completely satisfy everyone — it is after all an entirely acoustic collection of recently written material as well as classics and favorites from Corabi‘s previous bands.

The title Unplugged will likely have some people turning away. The idea of an artist doing an acoustic album in 2012 seems passe, but I have to say that aside from the simplistic and the uninspired album cover this effort is stellar. The original tracks “If I Never Get To Say Goodbye”, “Crash”, “If I Had A Dime”, and “Open Your Eyes” are fantastic and have ‘John Corabi’ written all over them. Corabi hasn’t lost a thing in the vocal department as his gravely, melodic pipes have simply gotten better with age.

Tracks from Corabi‘s past included on Unplugged are the previously unreleased Angora song “Are You Waiting”, The Scream‘s “Father, Mother, Son”, “Man In The Moon”, and “I Never Loved Her Anyway”, Union‘s “Love (I Don’t Need It Anymore)” and “Everything’s Alright”, and finally Motley Crue‘s “Hooligan’s Holiday” and “Loveshine”. The arrangement on “Hooligan’s Holiday” doesn’t work very well, as it’s the one track on the album where being unplugged affects the flow — it would have great to have “Drift Away” from Motley Crue ’94 in its place. Former Union bandmate Bruce Kulick makes an appearance on “Hooligans Holiday”, and also later during “Man In The Moon”, and as an added bonus the disc closes with a recent Corabi interview.

The standouts songs on Unplugged “Love (I Don’t Need It Anymore)”, “Everything’s Alright”, “Loveshine”, “I Never Loved Her Anyway”, “Are You Waiting” and “Crash” — and the two aforementioned tracks best showcase Corabi‘s polished abilities as a songwriter.

Unplugged isn’t for everybody — it is billed as ‘unplugged’, however it’s done well and not hokey. It’s neither ‘coffee house’ nor tacky — Unplugged is simply a fun, solid, good time that should tide people over until the next effort.