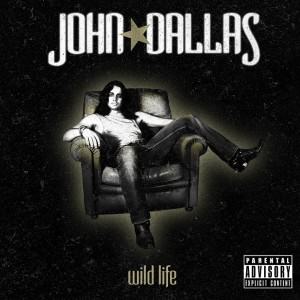 Review:
As I was listening to one song after another on John Dallas‘ Wild Life, all I could think of from one song to the next was “Too bad that this song has that awful modern guitar sound to it or else this might just be a killer song.”  After a couple of listens to Wild Life, I opened the CD booklet and my thoughts were confirmed as it is stated near the end “…this work features a more modern sound, with heavy guitars and short solos that every listener can enjoy…” Well, I do enjoy some of the songs quite a bit but it is despite the more modern sounds with the heavy guitars and short solos.

Frankly, if John Dallas had not included these modern touches or sounds to all of the songs on his debut album Wild Life, this might have been one of my favorite records of the year because despite the crunchy heavy guitar sound, there is a lot of melody in the songs and Dallas has a really good voice. Given my bias against the modern sounding guitars, I find the best tracks are the ones where the modern metal sounds are kept to a minimum or at least downplayed compared to some of the other tracks on the album. Songs such as “Falling” and “Freedom” could have been the ultimate power ballads back in the ’80s but also could have easily fallen into cheesy category with too much emphasis on keyboards so I think that John Dallas‘ slight modern touches work well for each one. The title track and first video for the album is likely the best song on Wild Life and the modern sounds on it don’t detract from its brilliance and catchiness. In a way, it reminds me a lot of the sound adopted by the now defunct Canadian metal band Snakeskyn Whiskey who also tried to blend modern guitar sounds into their hair metal or sleaze rock sound. Another good track is “Psycho Game” where the modern heavy sounds are kept to a minimum.

There is one track that is simply ruined by the modern sounds and completely misses the mark. The album closer “Love’s Fake” is way too much modern metal meets grunge meets Marilyn Manson for my taste. The more I listen to Wild Life, the more I seem to like it despite the modern sounds so it might be just one of those albums that grows and grows on me as more and more time passes. The question though is will I continue to listen to the album enough times to be sufficiently warmed up to its modern inclinations?

John Dallas – “Heaven Is” (with lyrics)