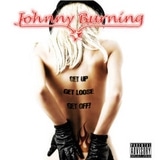 Review:
Not since the band Flame have I heard a male vocalist sound so feminine! At first I began to wonder if Alvin & the Chipmunks had broadened their horizons and delved into sleaze. It’s not such a bad thing though, because Italy’s Johnny Burning have released a pretty cool debut disc.

The best part of Get Up Get Loose Get Off! isn’t the female sounding vocals (although they quickly grow on you), it is the music behind the voice. Johnny Burning plays pure 80s sleaze rock with all sorts of grooves, dueling guitars and an heavy back-end. Musically this is some of the most infectious playing I’ve heard since groups such as Alleycat Scratch.

The disc kicks off with the one-two punch of “Wrong Shape” and “Devil Inside”, which are both top-notch rock songs that are driven by memorable guitar riffs and the perfect dose of attitude. Even the incredibly stupid title of “Sassy Lassie Goose” doesn’t change the fact that the band lay down a great groove on it as they do on the harmonica filled “Idiota”. If those two tunes weren’t enough, Johnny Burning really display their sense of groove on “Lost & Found” as it bounces along from start to finish.

You’d almost swear Princess Pang had returned from oblivion during “Burning Miracle”. The album takes a strange twist on the ballad “Shine”, a song that isn’t that bad and tailor-made for radio, but I’m not lying when I say it sounds like Tina Turner singing in places! I still can’t believe this is a male on the microphone, it’s almost as if a joke is being played on all of us.

The listener’s love affair with Get Up Get Loose Get Off! will live and die with the vocals. Personally the music is so incredible that I was able to overlook the strange, yet unique, singing of Manuel. Women seem to get ‘excited’ by guys in long hair and make-up, so can you imagine their frenzy when this guy comes along and sounds like a girl as well! You will likely want to check out some song samples before deciding to make this purchase, because I know everyone won’t be able to handle the vocals.