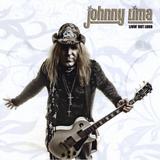 Review:
After a long hiatus, albeit still behind the production desk, Johnny Lima is back on the other side of the recording booth with his latest solo release Livin’ Out Loud. A talented producer, songwriter and musician (he plays guitar, bass and keyboards on this disc), it’s cool to hear some new stuff with him in front of the microphone. Johnny Lima has a great voice if, like me, you like the sound of Bret Michaels, early solo Vince Neil, Jon Bon Jovi and even the good old days of Def Leppard, this could be your thing.

Speaking of Bon Jovi, on “Hate to Love You” and “Hard to Say Goodbye” Johnny sounds so much like Jon Bon Jovi it’s uncanny. Fortunately, unlike Bon Jovi, he hasn’t changed his style of music and gone country. Lima has stuck to what he does best, which means no real surprises, but it does mean he keeps churning out more catchy melodic rock.

“I’m on Fire” has some of the most predictable cliched lyrics ever, but the song sounds so right I can overlook the cheesiness of it… and after all, since when have 80s hair metal lyrics been the most original? This is reminiscent of the era of music I loved, corny lyrics and all. “Caught In The Middle” is my favorite track on Livin’ Out Loud. Johnny Lima produced and co-wrote some tunes for Dirty Penny‘s debut album and this song would have been perfect for them, but Lima does a pretty good job of it himself.

There are a few fillers on this CD and I’m not too keen on “Somebody To Love”. It is a nice enough song, and again a perfect Bon Jovi vehicle, but it’s a bit sappy for my taste while “Wildflower” isn’t that great either.

If you happen to be new to Johnny Lima‘s music here is one of the best places to start, but if you are already a fan Livin’ Out Loud shouldn’t disappoint. While you are at it, try and check out his former band Attitude. Livin’ Out Loud is a worthy release from one of rock’s ‘Mr. Nice Guys’.