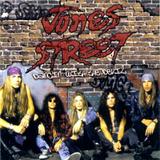 JONES STREET
DANCIN’ WITH THE DEVIL
Released 2008 (Back Alley Records)

Review:
Can you say sleaze please? And while you’re at it, say thank you to Jones Street because that is exactly what they have delivered on Dancin’ With The Devil. This is some of the best sleazy rock music I’ve heard in awhile, it’s just dripping with, well, sleaze! These songs were recorded from 1991 to 1995, which as we know weren’t the best years for this kind of rock and Jones Street have only released it now, but I’m glad they did.

From the build up opening of “Dancin’ With The Devil”, complete with a deliciously evil laugh, you can tell you are in for a treat as the drums crash in. Sure enough, vocalist Shawn Crosby doesn’t disappoint as he literally starts spitting out vocals. Crosby has a distinct set of pipes which fits this style of music perfectly.

“Fuck Authority” is more hard hitting gutter rock, with a bit of a punk flavor. If you aren’t so partial to power ballads like myself, don’t be put off by the tracks that start off slower paced, because even though they are a change in tempo, they are in no way ‘saccharine sappy’ in the usual ballad style. Lyrically and musically these are delivered with more guts and pack a lot more punch, so don’t be fooled by the ‘cruisy’ starts, they totally crank. “Tell Me Why” has a brooding intro completed by soaring guitar work. “When It All Comes Down” is worthy of an early Skid Row sounding label and “Take Your Love” has L.A. Guns‘ Phil Lewis written all over it.

Honestly, this whole disc just blazes through great song after great song – although the final track isn’t actually a song. It’s more of an English lesson you probably won’t find in the school curriculum!

This isn’t glam metal fluff. It is a CD jam packed full of lovely slabs of sleaze rock, as there isn’t a dull moment on Dancin’ With The Devil. Jones Street is a great band with a gritty, dirty edge, who have released an album with balls and plenty of attitude. Jones Street have their own sound, so comparisons are difficult but (and I know I’m using the word sleaze for about the 100th time, but it is what it is) if you like your rock on the sleazy side of the Sunset Strip it’s safe to say you will probably like this.