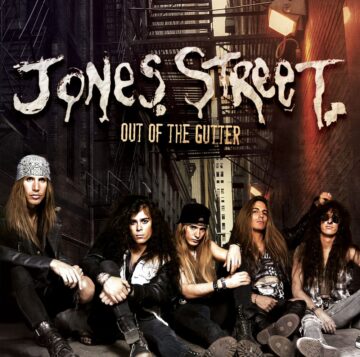 JONES STREET
OUT OF THE GUTTER
To be released on June 3, 2022 (Eönian Records)

Review:
The diligent folk at Eönian Records have unearthed, re-mastered and released another set from another long forgotten band who sadly got swept under every rug following the early 90’s grunge invasion. This time, it’s Hollywood based Jones Street whose recordings from ’91-’95 get a loving overhaul and a new album title.

“Dancin’ With The Devil”, the album’s original title, storms out in all its bourbon soaked, sleazy glory and is probably the finest song that Guns N’ Roses never recorded. Instantaneous, hook laden from the excellent twin guitars of Jonny Jones and Mickey Perez, not to mention the superb vocals of Shawn Crosby, should have made this a huge single or, at the very least,  a regular radio staple. The heartfelt, mid-tempo “Tell Me Why” is followed by the distinctly Ratt-like “What Comes Around”, all sex and swagger with another huge chorus and sublime guitar work. “Thieves Of Love” is a should have been arena pleaser with its lighter waving, Poison/Tuff type attitude, that continues throughout the joyous chanting of “Take Your Love”.

The second half of the album is back to full on sleaze mode with the gloriously threatening “Razor To My Wrist” and  JJ Jauregui’s bass and Anthony Focx‘s drums perfectly complimenting another fine Crosby vocal. The hauntingly atmospheric “When It All Comes Down” had a little Lancia feel to me, and the rather ironically titled  “We Won’t Be Forgotten” is yet another stomping gem, ahead of my least favourite track, the middle finger salute of “Fuck Authority”, and the rousing, drenched in sleaze perfection of album closer “On The Edge”.

The re-mastered production is sharper than the original 2008 release and the new title suits it so much better as well. The band members are faultless throughout. Crosby’s vocal on every track is nothing short of awesome, and the fact that neither he or any other member of the band appear to have recorded with, or starred in, any other band since the mid-90’s is deeply mystifying.

Perhaps they were dismissed as Guns N’ Roses wannabees at the time, and of course that influence is there for all to hear, but Jones Street were far, far more than that and it’s a crying shame that so many lesser talented bands were signed at the time and they were criminally overlooked. Out of The Gutter is a testament to that appalling crime, and is, quite simply, brilliant in response!

Reviewed by Rockney Colin for Sleaze Roxx, May 2022

Jones Street‘s “What Comes Around” single: